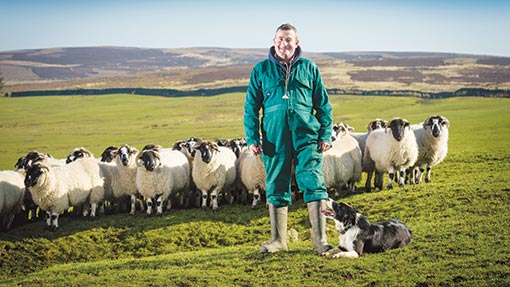 Not only is this powerful hill breed producing pure- and cross-bred wether lambs with superior carcass qualities.

But when crossed with the Bluefaced Leicester it’s providing Mule females for a second flock that’s gaining a big reputation for its Texel-sired prime lambs.

“The Lonk has such a good conformation for a hill breed, as well as being extremely hardy. But it also produces really outstanding Mule females.

“It’s one of the best-kept secrets among hill sheep, but it deserves wider recognition,” says Jim Scrivin, who farms at Park House Farm, Elslack near Skipton, and Leewarden Farm, Gisburn near Clitheroe, Lancashire.

He keeps 300 Lonk ewes, of which 150 are bred pure while the rest are split to go to Texel and Bluefaced Leicester tups.

“The Lonk produces top-quality lambs to the Texel, but we’ve also been breeding Lonk Mules for our own half-bred flock for more than 20 years, so we know what they’re capable of.”

When continental sires such as the Rouge and the Bleu du Maine first arrived in the UK there were those who felt they would be ideally suited to producing half-bred breeding sheep out of Lonk and Derbyshire Gritstone ewes.

The initial interest faded, but as a Mule producer it appears the Lonk can do no better than an alliance with the Bluefaced Leicester according to Mr Scrivin.

The farm’s 300 Lonk Mules are put mainly to Texel, with a few going to the Beltex. “Prime lambs out of Lonk Mules have a strong following among buyers at Skipton and Gisburn auction marts.

They have a superior carcass to prime lambs out of other Mule females and have a really tight skin,” adds Mr Scrivin.

See also: Keep up to date with the latest sheep news

The Lonk Mules were scanned at 200% in January. “They can match any other Mule for prolificacy, the ability to milk and to rear their lambs.

“We lamb them inside in mid-March and have the first-draw lambs away without any creep just into June. By that time we’ve got plenty of lambs at 37kg upwards, so we can start selling to meet the export trade and before prices ease back in midsummer. Most will be sold by September.”

The Lonk Mules are fed according to scanning results. Twin- and multiple-bearing ewes are moved on to lower ground and receive supplementary feed, while the single-bearing ewes are returned to the hill and offered feed blocks and a little sugar beet.

The Lonk flock is run on land up to 335m at Park House Farm and starts lambing in mid-April producing both purebred flock replacements and prime lambs by the Texel. All the hill sheep lamb outside and this year scanned at just over 150%.

These prime lambs are sold from Christmas onwards. They are housed and trough-fed for the final three weeks before selling.

“We really let them grow into their shape and then put the finish on them to produce a high-quality hogg for the early new year and spring trade, selling at 42kg upwards. The trade at Skipton is very competitive, but we’ve often topped the market there. Our best this season has been up to £80.”

As well as the Lonks, Mr Scrivin keeps about 60 Derbyshire Gritstone ewes – another north country hill breed whose wether lambs have been selling for up to 190p/kg this winter.

The Scrivin family maintains a keen interest in the type of fleece of both their Lonk and the Derbyshire Gritstone breeds.

“Wool may not seem like an important issue to some people, but we take a great pride in the fleece quality of our sheep and don’t want fleeces showing any kemp or black fibres. Income from wool is better now than it was, but the fleece quality also benefits the prime lambs and produces the tight skins buyers want.”

While the Lonk is a horned sheep, the Derbyshire Gritstone has no horns. This hornless characteristic – that once saw an increase in popularity, particularly among Welsh and Scottish hill producers looking for a “polling” factor in the breed’s offspring – is now enjoying a resurgence.

“There’s been more interest from Welsh hill farmers, in particular those looking to cross the Derbyshire Gritstone with the Beulah Speckled Face as a carcass improver.”

But the Lonk is an excellent hill ewe that has a huge amount of potential to do a great job if she was given the chance to prove herself. A mature Lonk ewe weighs about 80kg and she’s good at keeping her teeth.

“We’ve been very strict about culling for teeth over the years and now it’s not uncommon for ewes to go on until six or seven crops. We want a ewe with good, short teeth that are well on the pad.

“The good teeth have been inherited by the Lonk Mules we breed. These can keep going to give us at least six crops and that means we don’t have such a big need for replacements. We may only need 50 a year because they last so well.”