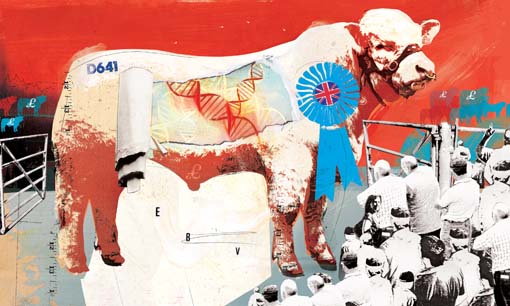 Suckled calf producers who are suspicious about relying on a set of figures to determine what bull they should buy, base their caution on the fact they feel safer making a decision on what they can see in front of them rather than something they can’t.

But the irony is that while a set of figures that rate a bull’s true breeding value are providing information about a bull that can’t be visually assessed, there’s more risk of failure with a bull bought purely on his “eye” appeal, than there is with a bull bought on the “hidden” value of his genetic potential.

EBLEX reckon a bull bought without any knowledge of his genetic potential via Estimated Breeding Value (EBV) figures is probably four times more likely not to achieve any improvement in the income earned from his progeny. That assessment is based on a bull whose progeny may be no better than the sire, simply match the sire’s performance, perform worse than the sire or not survive at all.

While bull buyers have now become used to checking-up on 400-day weight gain as an indicator of growth, progress in making use of the full range of performance indicators now available via EBVs has been slow among commercial beef producers.

In the early days of bulls being offered for sale with EBV figures there was a natural hesitancy among buyers who still valued their own visual judgement rather than relying on a set of numbers and percentages. But there’s now no doubt that mastering the interpretation of EBVs provides an insight into a bull’s breeding ability that cannot be gleaned from its appearance or its pedigree.

Making use of that “insider” information about how a bull can pass on his heritable superiority across certain traits, not only unlocks the door to improved performance through growth, weight gain and carcass quality – and boosts profitability as a result – but can also bring benefits through a wide range of other advantageous traits, such as calving ease and milking ability.

What the experts say

Ian Pritchard, beef specialist at SAC, has worked closely with the development of EBVs since they were first introduced. “Using EBVs as part of sire selection is the only guaranteed way to improve the performance of cattle from birth to slaughter and thereby increasing the profit that can be earned,” he says.

He’s recently produced a booklet for Quality Meat Scotland covering bull selection using EBVs. “Now that the bar-chart system has been introduced no one can say they don’t understand the figures. The bar-chart is a quick and simple way of assessing a bull’s EBVs at a glance. It couldn’t be simpler.”

While bulls bought through pedigree sales will automatically have EBV data available in the sale catalogue, those buying bulls privately need to be more circumspect and ensure as much information is gleaned from breed society sources if the vendor cannot supply it personally.

What is an EBV?

Estimated Breeding Values are a rating given for a range of traits – such as weight gain and calving ease – that can be passed on to a bull’s progeny. A bull’s breeding value is its genetic merit, half of which is passed on to its offspring.

How are EBVs calculated?

The calculation of the ratings for the range of traits that make up a bull’s EBV are based on the performance of individual animals within a contemporary group (a contemporary group consists of animals of the same sex and age class within a herd and which are run under the same management conditions and treated equally).

The trait ratings of each animal in the group are directly compared to the average of other animals in that group to arrive at an EBV unit of measurement for each animal. The individual EBVs are shown as positive or negative differences between a bull’s genetics and the genetic base to which the animal was compared.

How accurate are EBVs?

This method of trait evaluation has now been used for almost 30 years during which time thousands of bulls within all major beef breeds have been evaluated. It has established a massive database of genetic information, which makes accuracy levels high in most bulls.

Accuracy is determined by the amount of records available on the animal and its close relatives in any herd. The more information known about a bull the higher the accuracy. Growth traits have high heritability while maternal traits are lower.

Why are some accuracy levels low?

This may occur when an imported bull is involved and there is not the volume of genetic data available. Sometimes new bloodlines can mean the EBV accuracy is lowered but a bull with good figures, albeit based on a low accuracy rate, is often worth taking a risk on.

What does the index mean?

Indexes refer to either Terminal (Beef Value) or Self Replacing (Maternal Value). The indices are calculated from various trait figures and if a bull is needed primarily to produce herd replacements its Self Replacing indices should take priority – but a bull shouldn’t be selected solely on the index figure.

What are the most important EBVs?

Why are maternal traits important?

Maternal traits give a good indication of animals with genetic potential for herd improvement. They can influence a herd for many years through inherited genetics. Bulls selected to breed females must have the correct balance of EBVs and not show superiority in one trait.

The calving ease EBVs have now been introduced – Maternal Calving Ease/Calving Ease Daughters – which indicate the ease with which a bull’s daughters will calve if kept as replacements.

How to select for growth rate

For bulls to be used as terminal sires the growth trait EBVs are critical and will have a direct impact on financial returns. The 400-day weight EBV is the key figure, although if available the 600-day weight EBV can be used if females are being retained as replacements.

How to select for carcass traits

Select terminal sire bulls on Fat Depth, Eye Muscle Area EBV and Retail Beef Yield EBVs to achieve progeny that will produce high levels of saleable meat. If home-bred suckler cows are out-wintered, use a sire to produce replacements that have a slightly higher than average fat level.

What is the financial value of EBVs?

If the bull produces 38 calves a year that’s a total weight advantage of 760kg.

Over a five-year working life Bull A will produce an additional 3,800kg of liveweight in his progeny which at current beef prices is worth about £11,400.

If store cattle buyers were given more information about the sires of the cattle they want to buy they’d be prepared to pay more for them, says John Hoskin, Farmers Weekly’s Farmer of the Year.

“Although suckled calf producers who invest in bulls with good EBVs are keen to inform buyers at the sales, most store cattle going through the ring that are sired by AI bulls aren’t identified.

“If buyers were aware of the breeding of these store cattle – information that would indicate their potential performance for finishing – they’d not only earn a premium, but they’d take a lot of the risk out of the job of buying them,” says Mr Hoskin who farms in Dorset and Cornwall with sons Richard and Mark.

The Hoskins have recently set-up a new South Devon suckler herd and are using an Aberdeen Angus bull on the heifers.

“We’ve bought an Angus bull with EBVs for fast growth and easy calving. When these figures are available to us it makes sense to use them. There are certainly more suckled calf producers using EBVs as part of their bull selection, but dairy-bred calves by good AI beef bulls should be identified in the sale ring.

“If an animal can finish 30 days faster and it’s costing £1.50 a day to feed it, finishers can afford to pay more for an animal with that level of performance. Vendors of these cattle are losing out too if they’re trying to sell good stores yet don’t pass on any of the breeding information to the buyers,” says Mr Hoskin.