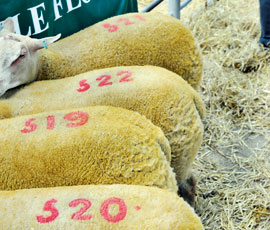 Over-fed, overweight and probably over-priced – so why are so many ram lambs presented for sale in a condition that does little to enhance their ability as active and effective sires?

Driven by the assumption that pre-sale show judges will always favour rams carrying “plenty of show condition”, breeders have followed suit by feeding and managing ram lambs with an eye for what judges want, rather than what buyers need.

As the ram-buying season approaches – a season that’s expected to see sheep producers make considerable investments in breeding stock – perhaps it’s timely to call for a change of mindset in the way breeders present ram lambs at pre-sale shows and the way judges evaluate them.

The term “fit for purpose” almost seems to have been coined to suit the needs of the ram lamb buyer, but all too often ram lambs aren’t “fit” for the job – and even if they are, it’s only in part. The average ewe:ram ratio in commercial UK flocks is about 50% of that being successfully achieved in Australia and New Zealand.

Attracting the eye of the judge, or trying to stave off the competition by producing bigger ram lambs with more “finish” than your competitors, has put many pedigree breeders on a treadmill of over-conditioning. While it may well produce animals for the show ring, it isn’t a recommended management regime for animals whose libido, fertility and overall health is about to be put to the test.

So how can commercial sheep producers ensure they make a wise investment in new crossing-rams this season and don’t allow themselves to be smitten by the “look” of a ram that may disappointingly melt away once he’s switched from a five-star lifestyle?

Signet animal breeding manager Sam Boon believes an increasing number of commercial sheep producers are becoming aware of the value of Estimated Breeding Values (EBVs) when buying rams – a trend that will lead the way in encouraging more sires to be bought on their genetic potential, assessed through their performance figures, rather than purely on appearance.

“Breeders selling rams without figures have more reason to over-feed. It’s like the arms-race between themselves and other breeders and they see the trough as the way to get size and condition. But bigger doesn’t mean better in terms of the ram’s breeding potential,” says Sam.

For those buying rams privately from non-recorded flocks, Signet advises buyers to try and inspect ram lambs well ahead of the purchase date.

“More buyers are talking to the breeder they intend to buy from so he can supply the type of lamb that’s required – and in the right condition for work. This benefits the breeder and the buyer – and if the rams do the job well the buyer comes back,” says Mr Boon.

“Sale catalogues with masses of performance information are available at least two weeks prior to the event. Buyers should do their homework and pick-out the lambs they feel could be most suited to their job.

“Making pre-sale selections based on figures before the sale allows extra time on sale day to evaluate the lambs more closely.

“And if you’re buying privately from a recorded flock there are figures relating to flocks in 20 different breeds available on the Signet website to help you make your choice,” Mr Boon explains.

Visiting the auction mart the day before a sale can be very advantageous to buyers: “Take a saunter around the pens, look what rams are being fed and how much. It can be quite an eye-opener.

“Get rams out of the pen to see them walk. Look at their feet, see how they breathe when they walk, and check testicles. It all helps select rams that are fit for purpose,” says Sam Boon.

Tips on selecting rams at sale

• Study ram EBVs before sale day and make a shortlist

• Look at what rams are being fed

• Get rams out of the pens and assess their breathing

The successful pedigree Charollais flock of Cumbria breeder Jonathan Wales has built its reputation on selling shearling rams to commercial prime lamb producers – and that means ensuring rams are sold “ready for work”.

“Our aim is to supply tups to commercial prime lamb producers and the averages at Kelso and Builth reflect that.

“We want our tups to grow and develop naturally; it’s something that’s being increasingly recognised by buyers who want rams fit for the job,” says Mr Wales who runs about 200 pedigree Charollais in his Thackwood flock at Raughton Head, Carlisle.

Tups are fed prior to sale, but only for about six to eight weeks. “Our tups have done all their growing and developing off grass and buyers know they haven’t been pushed. All we do is finish them off with a little extra feed.

“We even get some buyers coming to tell us the tups they bought off us the year before look even better – and that’s a great compliment because they’re improving as they mature. The last thing a buyer wants is for a tup to melt away and under-perform as a sire.”

Well-known sheep breeder Robyn Hulme from Ellesmere, Shropshire, believes pedigree breeders fail to recognise the need for ram lambs to be in the correct physical condition when offered for sale to commercial prime lamb producers.

“Pedigree breeders are on a different planet. The sheep industry is in a crazy situation where ram lambs to be sold in the autumn are overfed to pile on weight and size to make them look better.

“Buying an over-fed ram lamb is the last thing a buyer needs when he wants a vigorous sire that can get on with the job. And pushing these lambs too hard does reduce their lifespan,” says Mr Hulme.

Once renowned for his pedigree Crosemanor Suffolk flock, he has now switched to a low-input system based on “Easycare” New Zealand Suffolks. His spring-born lambs receive no supplementary feeding. The aim is to produce ram lambs weighing 65kg by October in readiness to be turned out with 80 ewes. Shearling rams sold from the farm will run with up to 150 ewes.

“Buyers want ram lambs that will do the job they are bought for. Last year one buyer took two shearlings and one ram lamb to run with 300 ewes and 292 ewes lambed within 21 days.”

He says over-feeding limits the libido, health and life expectancy of ram lambs.