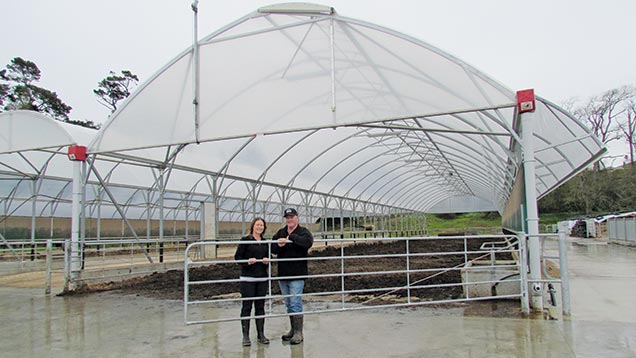 New Zealand dairy farmers have long prided themselves on efficient pasture-based milk production, but some are opting for a more intensive approach.

Farmers are facing the pressure of low milk prices and are acutely aware of the high cost of good pasture-growing dairy land.

Conversion opportunities on South Island have all but dried up where farmers converting sheep and beef land to dairying. This is due to increasingly stringent environmental rules making it no longer viable.

Ecologists and environmental groups are concerned at waterway degradation and question the eco­nomy’s reliance on dairy exports.

The answer for many has been to look towards stand-off or feed pads, as cows are out grazing year round.

Effectively, they are dedicated areas where a range of different supplements can be fed and effluent contained and irrigated on to land when conditions are suitable.

DairyNZ, funded by levy payments from all dairy farmers, calculates that the number of farmers bringing less than 10% of feed on to their farms dropped from 70% in 2000 to 40% in 2011. High-input systems importing 25% or more feed doubled to 26%.

But the levy body continues to take a cautious approach to intensification, arguing that a pasture-based production system is still the most profitable and flexible.

Soon to be updated, modelling work carried out by AgFirst consultant Phil Journeaux for DairyNZ, had shown intensification of two average farms in the lower North Island brought many benefits.

There was greater pasture production resulting from reduced poaching and increased organic waste application as well as higher milk production, a longer milking period and better cow condition with fewer dry or empty cows. Savings are also made on winter grazing and fertiliser costs.

“However, there is something of a catch-22 situation,” he says.

There needed to be a 17% increase in cow numbers and a 71% lift in MS production to cover the cost of building a barn.

And AgResearch work shows total nitrogen losses are more than double in confined grazing systems if losses of gaseous nitrogen are included, negating some of the environmental benefits.

Irish nutritionist Donal Blackwell recently managed a 700-cow herd in northern Victoria, before moving to Alltech. He believes the New Zealand move towards intensification is quite a slow, controlled change.

He adds that a big advantage of intensification is that it lets farmers get more in tune with cow signals rather than just relying on condition scoring, as many in New Zealand do. Heat stress is reduced by use of barns and well-fed cows were more likely to stay in herds longer.

A specially built area where cows can be taken off paddocks. They are primarily used during wet spells or drought to reduce damage to pastures.

They are constructed from free-draining material such as woodchips. If cows are held for extended periods (up to 20 hours/day), they need enough space to lie down. Often there is no provision for stock feeding.

A hard surface area normally located next to the dairy farm, where stock can be held for a short period of time (two to three hours), either before or after milking, and provided with supplementary feed.

One farming couple opting for the more intensive approach is Tony and Marlene Walters (pictured top), who have been feeding concentrates in their 18-aside herringbone since 2008. Two years ago, they decided to build a covered feed pad which would also serve as a calving barn.

They farm 92ha milking 230 cows which are all wintered on farm. Contractors make 120t of maize silage from the 4-6ha they generally grow on farm, and they were producing 75,000kg MS on a pasture-based system with maize feeding in paddocks.

They were using a stand-off pad with a bark surface they had built themselves when they needed to get their cows off pasture.

But winter and early spring were where they could make their biggest gains in production by reducing poaching and feed wastage associated with feeding maize silage in the paddock.

Their shed measures 60 x 30m and comprises of a concrete area covered with plastic which allows UV light through to kill any bacteria as well as retaining heat in the winter. A thermostat controls the temperature at 18C, with automatic roof vents to draw heat out.

There’s a 6.4sq m of space for each cow and they are bedded on locally sourced wood chips, spread to a depth of 300mm and cleaned out twice a year.

The cows receive a daily ration of palm kernel and maize silage before milking and while in the parlour, they are fed a mix of kibbled maize, brewers’ grain, wheat bran pellet, biscuit cereal and molasses at 1-2kg a cow a day.

We’re aiming for high production/cow because there’s less labour tied up. We never wanted to go to big numbers so this makes sense.”