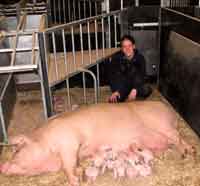 Can piglets be kept safe without farrowing crates? It is a question that gets many pig producers debating, but according to SAC’s Emma Baxter the answer is yes.

“The data shows that well-managed outdoor systems can achieve similar if not better production than the average indoor crated system with total mortality (stillbirths and live-born) deaths at about 19% for indoors and 16% for outdoors.”

“And although seasonal fluctuations are likely in outdoor systems, it has still returned similar weaning numbers as crates, with more than nine piglets on average from both systems,” she said.

However, although there are lessons to be learned from good outdoor systems, with nearly 40% of UK pigs born outdoors, due to environmental constraints it isn’t a system that would suit everyone.

However, with supermarkets such as Waitrose, M&S, the Co-op and soon Sainsbury’s making the move away from retailing meat from crated systems, coming up with an alternative that meets consumer, environmental, pig and stock person demands is vital.

Dr Baxter explained how an alternative system would have to address producer concerns. “An alternative system has to ensure good pig performance, have acceptable capital cost, have minimal running costs and also take in to account farmer safety. Balancing the needs of the animal with the farmer are key.”

And while there are alternatives already out there such as swing-side crates and the recently launched 360° Farrower, there can sometimes be variability between farms.

“These alternatives need to make sure they are robust, meet the increasing challenge of increasing litter sizes, offer operator safety, good pen hygiene and labour, deleiver consistent maternal behaviour and consistent performance as well as taking in to account the economics.”

An ongoing joint project run by SAC and Newcastle University and funded by DEFRA called PigSAFE is addressing the issues and design for optimum welfare and economics. “Experience with this system is showing it has promise and is addressing a lot of the issues mentioned, but full scale commercial and economic evaluation is necessary for systems to be tested in the real world,” she said.