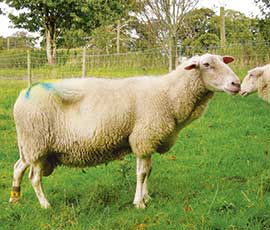 The number of flocks infected with the costly viral sheep disease maedi visna (MV) has doubled in the past 18 years, according to recent figures.

Although rates of MV are still relatively low – with about 2.8% of flocks testing positive for the disease – the effect it can have on individual flocks and the industry is devastating.

“We have seen a doubling of the number of flocks infected with MV and clinical cases within flocks. In flocks testing positive for the disease, the percentage of sheep infected has increased from 13% to 24%,” she said.

It is thought about 109,000 ewes are now infected with MV out of a total of 14.75m ewes. “It may not sound a lot, but the effect it can have on individual flocks is devastating. And once you get it, it is hard to get rid of,” she stressed.

Ms Batty said it could take up to 50% of animals in a flock to be infected before any clinical signs of the disease become apparent. “The clinical signs are also not specific, amongst others weight loss, pneumonia, mastitis, arthritis and hind limb paralysis, which is why it often goes undetected.”

Ms Batty said she knew of a 1,500-Masham ewe flock where symptoms included single-bearing ewes being in poor body condition, a lower lambing percentage, an increased number of thin ewes and deaths, poor lamb rates due to smaller lambs and lower milk yields, cull ewes that were harder to fatten and an increase in replacement rates.

“When the flock tested for MV we found four out of six ewes tested positive for MV. This farm suspected they brought the disease in through a bought-in animal about eight years ago. Clinical signs have only just become visible because this virus has a long incubation period, which is why it can go unnoticed for long periods.”

Brian Hosie from SAC Consulting said the biggest risk he was aware of was MV-accredited flocks being run alongside non-accredited commercial flocks.

“We are seeing about six breakdowns a year out of our 2,500 members in the MV accreditation programme,” he said.

Read more on Maedi Visna and how you can test