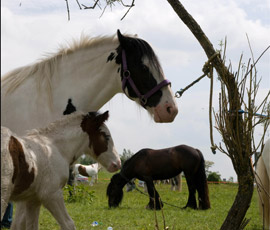 The NFU has called for fly-grazing, where horses and ponies are dumped on farmland, to be made a criminal offence.

The union will publish a 19-point action plan later this week calling for stronger punishments for fly-grazers and a more “joined-up” approach between government, local authorities and the police to work together to fight the problem.

The Welsh government has unveiled plans to crack down on fly-grazing amid recent reports from animal welfare charities, including the RSPCA, that 7,000 animals every year are at risk.

Alun Davies, minister for natural resources and food in Wales, announced plans to create or amend legislation to combat fly-grazing on 18 July.

However, the UK government has no such plans in England at a time when thousands of horses are at risk of suffering and death and landowners and local authorities are struggling to cope with the problem.

NFU chief rural affairs adviser David Collier said: “There is a danger that Wales’s gain will be England’s loss, as the problem is displaced eastwards. This makes the need for action in England as well as Wales more urgent than ever.”

An NFU survey in 2012 found that 6% of its members – amounting to well over 1,000 farmers – have direct experience of fly-grazing.

The survey found that the problem had worsened over the previous three years, despite the introduction of compulsory horse passports and micro-chipping. These measures were intended to increase the traceability of horses, particularly those likely to enter the food chain.

The NFU said there was no low-cost legal remedy readily available to farmers to tackle fly-grazing, but there was scope for the authorities to provide more assistance using existing law.

World Horse Welfare chief executive Roly Owers said: “We need better legislation and enforcement to hold irresponsible owners to account and more support for local authorities to deal with the number of horses left to breed, graze, suffer and often die on other people’s land.

“If Wales takes action and the rest of the UK does not, the problem will simply move over the border. We need a joined-up approach.”

RSPCA head of public affairs David Bowles added: “We were disappointed when the UK government decided to shut down the national equine database and we urge the government to reinstate a robust and thorough system of linking horses to owners.”

A DEFRA spokesman said: “It’s unacceptable if people graze their horses on other people’s land without their permission, and put the animal’s welfare at risk.

“Fly-grazing can and will be dealt with under new anti-social behaviour laws when the owner of the horse can be found.

“Horse owners have a responsibility towards their animals and we’re happy to work with local councils and others to remind them of this.”