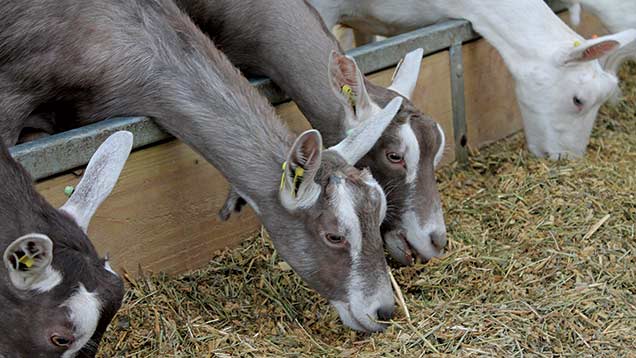 Last year the herd of 504 goats at Pant Farm, Abergavenny, Monmouthshire, was yielding 750 litres a goat/year on average.

But in the past year close attention to detail has seen yields boosted to 1,000 litres a goat/year, despite the fact the herd has expanded to 650 head.

Mr Yeomans and his wife Jess, who supply Abergavenny Fine Foods – the UK’s largest producer of fresh goats’ cheese, switched from milking cows to goats in 2002 in favour of the higher prices paid for goat milk.

The couple became part of a benchmarking group a few years ago and realised there was a big potential to boost yield by increasing the amount of concentrate fed.

On the advice of independent nutritionist Tom Chamberlain, they increased concentrate use a goat by 13%.

Although feed costs have increased by 6p/goat/day (see table), margins have actually improved because the amount of milk produced/goat/day has gone from 2.7 litres to 3.2 litres.

Mr Yeomans feeds the milkers a total mixed ration (TMR) consisting of homegrown forages and cereals to make the most of farmland.

However, in the past year the energy density and fibre of the milking ration has been increased.

The two biggest changes in the ration were the increase in crude protein from 16.5% DM to 18% DM through the inclusion of soya bean meal and starch levels have improved from 24.7% DM to 30% DM by increasing maize in the diet, explains Mr Chamberlain.

Mr Yeomans installed a new feed barrier, which has improved access to the feed passage, and he is now pushing up feed three times a day.

“We clean out older feed once a day. We would like to put a polished floor in the shed next year to improve the feed surface,”explains Mr Yeomans.

He has also bought a new Keenan feed wagon that chops the ration with knives. He says this has improved chop length and mixes the ration much better.

Mr Chamberlain says each 500g increase in DMI equates to an extra litre of milk.

“Intakes are the key driver [of yield]. A goat eating 2.25% DM will only produce 2.5 litres of milk. If she eats 3.5% DM then she will produce 5.2 litres of milk. The more we can get them to eat the better,” explains Mr Chamberlain.

In January the Yeomans started milk recording monthly with an EID reader and this has helped them to selectively cull low yielders.

Mr Yeomans says since recording started they have culled hard, removing anything giving less than 2 litres/day. This has lowered numbers from 750 to 650, but they will be back up to 700 milking once kidding has finished.

“We did used to cull the low yielders but recording has given us a better handle on consistent low yielders.”

Mr Chamberlain says high output is a must for any goat business because the high biosecurity risks of keeping goats outdoors means it is difficult to graze goats.

Improvements in performance at Pant Farm