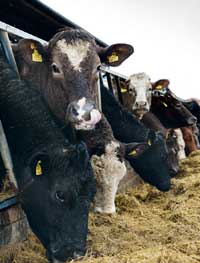 Marker vaccines could be the answer to future infectious bovine rhinotracheitis (IBR) eradication in the UK, according to Intervet Schering Plough.

To try to eradicate IBR it is necessary to tell an infected animal from a vaccinated, non-infected one, which is impossible with standard (non-marker) vaccines, explains the company’s ruminant vet adviser Paul Williams.

“Marker vaccines offer all the benefits of a traditional IBR vaccine while also providing the opportunity to export healthy animals Ð as marker vaccinated and non-infected Ð to IBR-eradicating parts of Europe.”

Without this, a growing movement across the EU to eradicate IBR in cattle could become a
barrier to trade for countries like the UK without formal control or eradication schemes in place.

“The UK is way behind its European competitors in terms of disease eradication, and now IBR has become a widespread and costly disease in beef cattle in this country,” Mr Williams continues.

“This compares poorly with other EU countries such as Holland, where disease exposure levels are less than 10% of the national herd. And in Holland, live marker vaccines now account for more than 90% of their IBR vaccine use,” he says.

“The cost of IBR is also potentially enormous, so control is imperative,” says Mr Williams.

Studies have shown infected cattle can take up to four weeks longer to finish. In addition, animals can die from IBR, pushing losses into the thousands of pounds.

“Being able to distinguish a vaccinated animal from one that has been exposed to IBR naturally Ð or one that is naturally free from infection Ð will be a significant benefit for any producer wanting to move towards disease eradication.

“As disease-free accreditation may yet arrive in the UK, the wholesale move to marker live vaccine makes sound commercial sense,” he says.