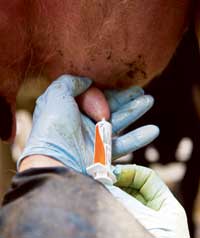 Vaccination could be another tool in the mastitis tool box, but how should it be used? Aly Balsom finds out

A vaccine against mastitis may appear to be the answer to many a farmer’s prayers, but according to vet Mark Burnell, Synergy Farm Health, the vaccine is by no means the panacea.

“The only mastitis vaccine available in the UK involves a complicated programme and is quite expensive. The decision to use it should not be taken lightly and management issues must be addressed before implementation.”

This is not a vaccine for poor management, stresses The Livestock Partnership vet Maarten Boers,

He explains that the vaccine is designed to cover the main risk period for mastitis infection – at the start of a lactation.

“The vaccine is given in three injections, which must be repeated every year. The first two are given in the dry period at 45 days and 10 days before calving and the last 52 days after calving.”

Although you can vaccinate all cows, Mr Burnell says you don’t have to. “By vaccinating, you are not reducing the mastitis, so you could just treat high genetic merit cows to protect these ones.”

WHO IS IT RELEVENT TO?

The vaccine could be used by producers who have done the best they can to reduce mastitis in the dry period, both in terms of environment and protocols, but are still suffering, says Mr Boers.

“This strategy could also be useful in high-yielding herds where cows are under more stress. Immunity can be compromised in cows that are producing 10,000-12,000 litres a year, particularly at peak yield. So I expect the vaccine to be more relevant to these high-yielding animals.”

And because the vaccine does not cover all mastitis-causing bugs – must notably Strep uberis – producers must be aware of the pathogen profile on-farm before vaccinating.

“When these specific pathogens aren’t an issue on farm, there is no point in going down the vaccination route – milk bacteriology is a must,” he says.

Environmental mastitis would be the main reason for vaccinating, Mr Burnell says. “There may be a place for using the vaccine for contagious pathogens, but finding the carrier cows would be the main course of action for this problem.”

A farm with zero tolerance of mastitis or a herd with limits to the level of improvements they can make to buildings, could also find the vaccine helpful.

Cost and time must be considered when choosing this strategy, says Mr Boers. “Because cows need to be vaccinated three times a year, those herds that are all-year-round calving may find it complicated to comply with timings.”

However, Mr Burnell says that any farmer contemplating using the vaccine could be disappointed. “Vaccination doesn’t necessarily stop infection, but reduces the severity of cases.”

He stresses the importance of monitoring and reviewing use of the vaccine. If you don’t do so, you could just add in more costs, he says.

“As with all vaccines, you wouldn’t want to vaccinate a sick animal. If you did inject a cow that had mastitis, you wouldn’t cure her and she wouldn’t improve.

“A lot of other things can be done to improve mastitis that are far less costly than vaccinating. Ultimately, it depend on individual situations as to whether it is appropriate.”

Mastitis vaccine research in the UK

A trial is currently looking at the efficacy of the mastitis vaccine in UK herds.

The research, which includes 2500 commercial dairy cows, is due to finish in 12 months time, with initial findings to be released in the Summer.

Vet Andrew Bradley, Quality Milk Management Services, says there is a need to establish how well the vaccine works under UK conditions.

“Registration trial work was carried out in Spain where there is a whole different mix of mastitis pathogens compared to the UK. For example, Strep uberis is not a major issue in Spain.

“Collecting local, UK data is very important in establishing whether using a vaccine which is effective against Staph auereus and E coli will result in more cows getting Strep.”

Vaccinating cows has been part of an overall mastitis control plan at Beddington Farm, Midhurst.

Herdsman, Ian Fermor, explains that installing a cluster flush system in June 2010 and general housing improvements had helped drive down mastitis, but despite this, the farm experienced a bout of cases last summer.

“At the time, we had no grass, so cows were on the full winter ration and laying in the same paddock over a number of weeks. As a result we had a lot of bad cases of E-coli mastitis. Although we didn’t lose any animals, we did have to dry off some quarters.”

The farm aims to keep the herd of 126 cows out as long as possible, while maintaining yields of 10,300 litres a cow a year. But when mastitis became a problem during this period, cows were immediately bought in at night.

As well as the obvious cost of mastitis, milking time was also extended at this time, with it taking three hours to milk 90 cows through the 10:10 herringbone parlour. Since improvements, Mr Fermor is now milking 105 cows in two-and-a-half hours.

Cows are doing so much yield wise, disease resistance just isn’t as good as it was when they were low yielding. If we can help reduce the level of mastitis cases, then it is well worth vaccinating, says Mr Fermor.

However, he stresses that good record keeping is the key to ensuring cows are vaccinated at the right time.

And to further drive down cases, dry cow management will also be improved this year.