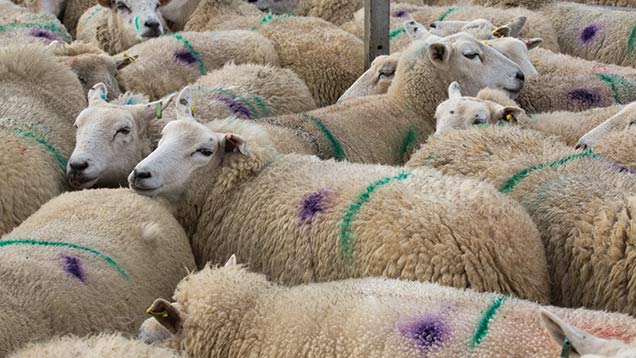 A leading sheep advisor is calling for farmers to breed cull ewes this season rather than sell them in order to increase stocking rates.

Sheep specialist John Vipond believes getting another lamb crop from existing stock is an ideal way to improve farm productivity, particularly as many UK sheep farms are understocked.

He says getting an early lamb crop from cull ewes can help maximise profitability without additional capital outlay.

“The problem is, farmers are risk averse. Sheep in this country are being marginalised by being kept on poorer land like HLS and with variable rainfall difficult to predict, it’s easier to cut back on stocking density.

“You can be risk averse, but if you’re losing money, you need to make a change,” he says.

Farmers are more reliant on decreasing levels of support and environmental payments, Dr Vipond said, so it’s essential to look within the farm boundary to think about how to increase productivity throughout the year.

And with the AHDB Beef and Lamb Stocktake report showing an average lowland breeding flock’s net margin was -£16 per ewe put to the ram in 2014, management changes must be made to target profitability, he adds.

“Profitability has two main factors – weaning percentage and stocking rate. I want to start people thinking about how to manage [their flock] so they can carry more stock.”

Dr Vipond says farmers should aim for 30% of stocking units to be flexible so they can get rid of them if it turns dry.

While Dr Vipond agrees genuine culls should go, he also believes farmers should keep cull ewes and tup them a month earlier than usual to maximise the spring and early summer period of rapid lamb growth.

Selling finished lambs early also acts as an insurance against a dry summer, or if the cull ewes have to be sold, farmers wouldn’t be worried as they were going to go anyway, he adds.

Additional safeguards should farms run out of grass next year include selling ewes with lambs at foot, or getting cull ewes to market after weaning, as these will beat the regular cull ewe influx, says Dr Vipond.

Other groups that could be mated early include those ready to sell as drafts, or the fittest ewes, which should be put to the tup for one cycle, marked, then put back with the rest of the flock. It should be simple, he adds.

Dr Vipond urges farmers to make decisions now about which ewes to send to the tup early to ensure there is enough time to flush them if needed.

However, in light of low replacement ewe prices this year, Paul Ashton, sheep auctioneer at Sedgemoor, believes farmers should buy in new replacements.

“The way forward is to cull ewes stronger and harder, as two tooth breeders are getting £15-20 less a head than the same time last year. A decent two tooth will cost around £100 a head.”

Couple this with the slight dip in cull ewe trade over the last month to £80-£90 a head and Mr Ashton believes for the sake of £20 it is better have two tooths that will do the lambs much better with higher milk quality, than keep on broken mouths.

Mr Ashton warns any farmers keeping cull ewes to choose them carefully, as most are sent to market for a reason.

“It may be possible to keep on the leanest cull ewes to graze and fatten, but farmers could end up with a lot of fallen stock.”