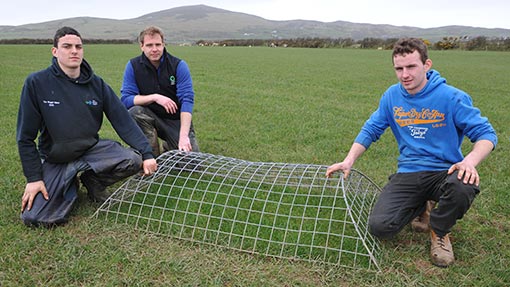 Reseeding pasture can double the production of early spring grass, helping sheep farmers reduce their feed costs by exploiting grass and cutting back on concentrate use.

However, failing to address soil compaction problems can lead to disappointing grass growth and prevent these savings being made.

At Gwythrian Farm, a Farming Connect Demonstration Farm near Pwllheli, the Williams family is aiming to increase early spring grass production in a bid to reduce feed costs by expoiting grass.

It follows a “Grazing for Profit” trial carried out by Farming Connect last year, which demonstrated that new leys, in most cases, produced twice as much pasture as old leys in the spring.

Alan Williams, who farms with his sons, Dafydd and Wil, expected 20 acres of a two-year-old perennial ryegrass ley to outperform old permanent pasture, but the figures were surprising. The new ley produced 6kg DM/ha/day – 2kg less than a nine-year-old ley of the same grass that was also monitored.

The trial, which was overseen by grassland specialist, Charlie Morgan, revealed soil compaction was to blame for this poor performance.

The field, on heavy clay soil, had been used for silage production and this had compacted the soil during the poor summer of 2012, despite the field being well drained. This damage prevented root development and penetration, says Mr Morgan.

“Then last year’s dry summer caused drought stress on this new reseed, and because the roots were nearer the surface, the response to fertilisers was poor, preventing the sward thickening up and resulting in lower yields.

If soil damage is not addressed, grass will not grow to its full potential, says Mr Morgan. “Yield will be lost and livestock will need to be housed for a longer period.

“Applied nutrients have an increased risk of surface run-off and the nutrients that are in the soil profile won’t be accessible to the roots of the plant because they can’t grow into these areas due to compacted and unaerated soil.”

Mr Morgan recommends a soil slitter for surface damage not deeper than 5in, or a grassland subsoiler for deeper, more severe compaction in heavier soils.

Adequate drainage is also needed. There are also specialist low disturbance subsoilers for minimising soil heave, but with the ability to deliver different levels of surface soil disturbance.

Although these machines can help to restore productivity, timing is critical. “The window of opportunity can be incredibly narrow, and will depend on soil conditions,” says Mr Morgan.

“If the conditions are too wet, the metal blades will smear the soil and cause the slit to fill with water, which is much worse than not doing anything at all. If it is too dry the machine may not get into the ground.”

At Gwythrian, Mr Williams admits the compaction would have gone unnoticed if the pasture had not been measured as part of Farming Connect trials. “We would have missed another year of productivity.”

Farming Connect facilitator Gethin Davies warns if grass growth isn’t measured problems can go unseen. “Poor grass growth can be due to a number of reasons, but farmers often don’t know it is happening because they don’t measure.”

Costs of failing to maximise grass for sheep

Many sheep farmers are missing an opportunity to trim their costs because they overlook the full production potential of grass, says grazing specialist Charlie Morgan.

“The key is to stop feeding the ewe as early as possible in the spring to reduce costs,” says Mr Morgan.

“Grazed grass is valued at 6p/kg dry matter, a quarter the price of concentrates, although this is dependent on yield and grass utilisation. Concentrates are essential for early lamb production but they need to be a supplement to grass, not a substitution for poor grass.”

At Gwythrian, the flock of 1,200 Suffolk-cross and Welsh mule ewes lamb from 20 January to 10 March and the ewes and lambs go straight out to grass so the amount of grass produced in early spring is worth more to this system than if they were produced later in the year.

The farm carries three ewes per acre at turnout, each with twin lambs and rears 1.68 lambs a head. About 56t of concentrates are fed from December to April at a cost of £25.24 a head.

Mr Williams says increasing pasture use is his main focus for increasing profitability. “That’s the single most important thing we have to get right,” he says. “This could allow us to feed less concentrates or to carry more stock.”

A ewe will require 3% of her bodyweight in dry matter a day and if grass has an energy content of 12MJ/kg DM of metabolisable energy, it is possible for spring grass to support ewe maintenance plus the required milk production for twin lambs without concentrates. This figure also accepts some weight loss of the ewe during lactation.