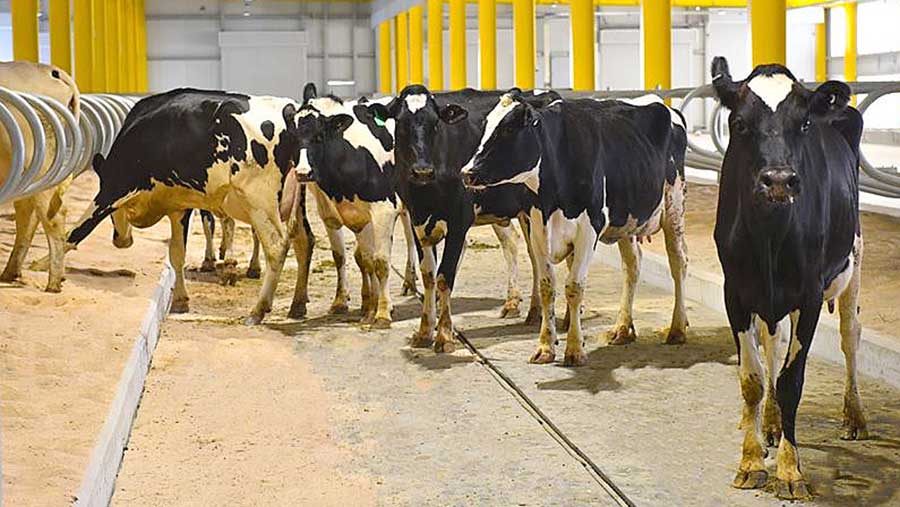 A new dairy farm in Qatar aims to become the country’s sole supplier of dairy products in the wake of trade embargoes imposed by neighbouring countries.

In June, Saudi Arabia, the United Arab Emirates, Egypt and Bahrain severed all diplomatic ties and imposed trade boycotts on Qatar because they believed it supported terrorism.

These blockages meant normal imports of dairy produce, mainly supplied by Saudi Arabia, could no longer be received. So Baladna Farm decided to set up its own dairy unit to supply the needs of 2.6 million people.

The farm has erected air-conditioned barns to accommodate the cows and is using a 100 unit rotary parlour.

Currently, there are 1,800 Holstein cows in the herd, sourced around the world and flown into the country by Qatar Airways. They are currently yielding 30 litres per cow per day.

But more cows are on the way from the United States and the goal is to build the herd to 14,000 cows.

“At Baladna we process, pack and distribute all our own milk, which means the farm basically gets paid for volume,” said Mr Dore. “We are currently building a new 500t/day dairy and juice factory to utilise our milk.

Temperatures can hit 48C on the Qatar farm because it is situated mostly in a desert.

“The challenge is humidity,” said Mr Dore. “It’s trickiest at dawn and dusk, and drops in the middle of the day, so that’s when you need to get things done.”

As well as supplying the liquid market, the farm also has 40,000 Awassi sheep and 5,000 goats, and it aims to fatten bulls to 10 months old for the beef chain.