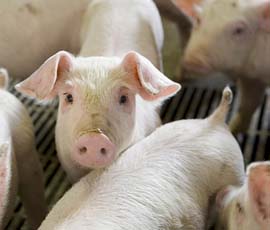 Large-scale agriculture threatens to drive hundreds of British farmers out of business, claims a report.

Small family farms are likely to lose their livelihoods if the go-ahead is granted for “mega-farms” housing thousands of livestock, warns the document.

Cheap meat or milk from large-scale production systems would pile the pressure on farmers already struggling to make a living, it suggests.

The joint report was published by the World Society for the Protection of Animals (WSPA) and the Soil Association on 18 April.

The full report can be downloaded here.

Its publication was timed to coincide with a public consultation on plans for a large-scale pig farm at Foston, Derbyshire. The pig farm would produce 52,000 pigs each year.

Simon Pope, WSPA head of external affairs, said smaller farms worked better for farmers and consumers. “The real cost of food produced in factory farms is poor animal welfare, pollution and the economic death knell for thousands of small-scale farmers. That cannot be something we sleepwalk into accepting.

“If we do, it’s difficult to see how the British countryside and our traditional rural communities will ever be the same again.”

The Foston development has replaced Nocton Dairies as a high-profile target for opponents to large-scale farming.

Plans for a 3,770-cow dairy herd at Nocton Heath were withdrawn earlier this year on environmental grounds.

The WSPA and the Soil Association claim Nocton could have forced 50 average-sized family dairy farms out of business. The two groups now claim that up to 350 of the smallest pig farms could lose all their sales if pork from Foston hit the market.

“These huge factory farms could herald a new phase in the way British farmers keep animals, opening the floodgates to similar developments.”

Midland Pig Producers – the company behind the Foston development – said animal welfare was its top priority.

Its proposals have been devised to the highest possible specifications, according to a Q&A on the Foston website.

“These plans have been inspected by some of the most highly respected animal welfare groups, whose concerns we have tried to accommodate in the design.”