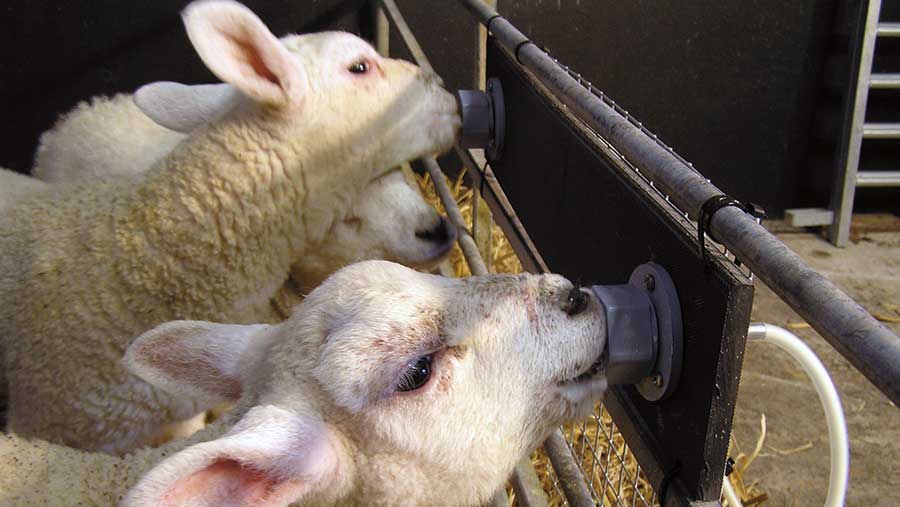 Orphan and multiple lambs reared on a machine that heats milk on demand are finishing earlier than ewe-fed lambs at a Leominster sheep enterprise, generating early sales and cashflow.

Andy and Frances Offer sell lamb directly from the farm at Whyle House Lamb and at farmers’ markets.

Another important retail outlet is the supply of lamb burgers at local food festivals but they had sometimes struggled to finish sufficient lambs to meet demand.

Surprisingly, orphan lambs have plugged that gap. Mortalities among these animals had been high when they had been reared on feeders that kept milk constantly warm.

Since the Offers switched to a feeding system that only warms milk when lambs draw it through the machine, deaths have not only been all but eliminated but these animals are ready for slaughter ahead of ewe-reared lambs.

Getting lambs off the farm quicker

“They grow quicker and they are the first to go, it is an almost foolproof way of getting surplus lambs fit and off the farm,’’ says Mr Offer.

“These lambs probably wouldn’t be suitable for the retail meat trade because they are young and the flavour isn’t quite there, but they are perfect for the burgers we sell at festivals.’’

The early sales also help with cashflow. “It helps at a time of the year when we are short of lambs,” says Mr Offer.

“We need to sell every week of the year. The hoggets last until June and normally the lambs reared on the ewes are ready in August so we used to struggle through June and July. We now have the security that we will have lamb available.”

Mr and Mrs Offer run a flock of 200 Welsh Mules and Welsh Mule cross Texel ewes, breeds that produce the carcass size and type of meat they require for their business.

When ewes produce triplets, the third lamb is reared on a feeder and so are the orphans.

These lambs were originally reared on a warm milk feeder but there were issues with digestive upsets and scour. “Lambs never did very well on them so we gave up and went back to bottles,” Mr Offer recalls.

“We then used racks to hold the bottles while the lambs fed. Our hygiene is good so this was quite successful but it became quite a chore.

“We had been feeding four times a day and it was extremely difficult to manage. As lambs got bigger they wanted more milk so it took hours to feed.’’

Two years ago the Offers bought a Heatwave milk warming machine, which at that time represented an investment of around £400.

Milk is stored cold in a standard bucket and, as the lambs draw it through, it is warmed by a water bath in the feeder.

“Because the milk is stored cold you don’t have all the bacteria build up that comes with a feeder that keeps milk constantly warm,” Mr Offer explains.

“It has eliminated digestive upsets. We have to keep on top of diseases such as coccidiosis and Pasteurella, which lambs in an intensively reared environment are vulnerable to, but it has proved very successful.’’

The machine has two milk lines and each can be divided into two so it gives the option of supporting both baby and older lambs.

“We set the machine up and take the pipes into slightly different directions. We separate the lambs into different pens so the tiny ones can be under a heat lamp and we can use different size teats,” says Mr Offer.

The only disadvantage, he says, is that the temperature can’t be altered independently for the two lines. “That would be the absolute ideal but it isn’t really a problem and it’s probably better for the small lambs to be getting the slightly cooler milk that the bigger ones need. It’s always tempting to make the milk too warm.”

This year, 39 lambs were reared on this system. Mr Offer says mortalities are now rare. “Losses among these lambs could be as high as 25-30% when they were on a warm milk system, even though we were very careful.

“Now we might lose one or two but these are often the ones that shouldn’t have been put on the feeder in the first place.

“We are keeping a lot of small lambs alive because, even when we were rearing on bottles, they wouldn’t grow as well as they do on the feeder and generally it was more difficult to get them away.”

Ewes lamb indoors in early March and are quickly turned out to grass with the lambs.

The feeder is set up in a single pen but, as more ewes and lambs are turned out, this pen is extended to allow more space for the lambs.

The pen is regularly mucked out and bedding kept dry. The machine’s milk lines and teat receptacles are frequently cleaned with a milking parlour circulation cleaner. Mr Offer describes it as “basic good animal husbandry”.

He adds: “Even when the machine is fully operational with four teats on two lines it only takes half an hour to clean each morning.

“We mix a batch of milk while we are cleaning it and another batch in the evening before we come in for the evening and they are OK on this.”

He says any type of ewe milk replacer is compatible with the machine.

Lambs are introduced to creep from birth. “It is something for them to nibble on even when they are very tiny,” says Mr Offer.

Lambs are always weaned at five weeks. They are fed straw, hay and creep feed and the aim is slaughter in early July.

They easily achieve weights of 35kg-40kg. “The lambs fed this way grow quicker and are the first to go, before the ewe-reared lambs,” says Mr Offer.

“We aim to have them gone by 1 July otherwise they start to cost a lot of money because of the creep they eat.

“They don’t go outdoors; they never really develop properly as a grazing animal because they are not with their mothers.

“We used to turn them onto grass and they were OK while the weather was good but as soon as it turned colder they would go backwards.”

Mr Offer says the only downside is that the system works so well that it is tempting to turn to it too quickly.

“When you get a recalcitrant ewe who isn’t letting her milk down properly or who doesn’t have much milk, with time and patience you know you can overcome this but, when you are worn out and it is 3am, it is an easy option to put the lambs on the machine, although we don’t do it that often!”