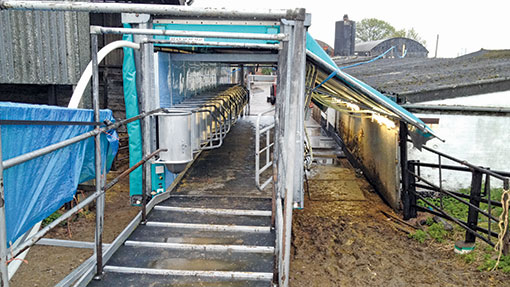 Continuing to milk through the parlour while upgrading it can lead to cow stress and more work for milkers. Modern milking bails could be the short-term answer, say two experts.

Trying to milk cows through one side while revamping the parlour can lead to a flare-up in cell counts and create long-term lameness issues.

However, putting cows through a milking bail instead can cut stress for both cows and the operator.

See also Keep up to date with the latest dairy news

While a temporary milking facility is not without its challenges, there are more benefits to getting the installation done smoothly and efficiently, says parlour specialist Ian Ohnstad.

“For new parlours in new sheds, we’re looking at 12-16 weeks building and installation time and, 90% of the time, a farm doesn’t need a temporary milking facility,” he says. “But trying to work around a herd while it is still being milked in a parlour could take months, adding significantly to stress levels and costs.”

How to minimise stress

Milking times often double, which affects the rest of the daily routine, not to mention other farm work. And as a DairyCo Mastitis Control Plan deliverer, Mr Ohnstad points out that cell counts will increase due to higher stress levels, leading to more clinical cases of mastitis and a depression in yield.

“Cell counts are never a quick fix. Work on the parlour while it is being used could lead to issues with vacuum stability or reserve.

“There can be physical changes in the equipment and extended milking times lead to stress, while the extra standing time can lead to long-term issues with lameness,” he explains.

“A milking bail is never as nice as a permanent fixture, but with a bit of innovation and planning, it can work well. Consider the pros and cons: would you rather have one month of inconvenience in a bail or three months in the existing parlour with a team of people working around you?”

Today’s milking bails are modern herringbones, direct to line with automatic cluster removers, milk meters and rubber matting. Mr Ohnstad says most dealers have access to one for hire, starting at about £350/week plus delivery (on a low loader) and installation.

“Cows go up a ramp for milking and down one to get off. The operator is at ground level, so that cows are about 1m above him.

“Most people feed in a bail, although this is done manually, as it helps with loading and keeps cows quiet.”

When the changeover is done quietly and calmly, he believes cows adjust more readily to the change in gradient than they cope with the noise from being milked in a parlour that is being upgraded or contains unfamiliar objects.

The key to success is to rely on the judgement of the engineer who is installing the parlour to source the bail.

“There aren’t enough bails around to be choosy, but ask for it to be tested and, once installed, have it checked for vacuum, reserve and pulsation. The dealer will connect it for you and can advise on the cow logistics for your site. It’s in his best interests for it to work,” says Mr Ohnstad.

He finds that many people tolerate milking cows on just one side of  the parlour for a month and often fail to plan parlour changes properly.

“Block-calving herds find it much easier to crack this problem because they shut down the parlour completely when cows are dry.

“This can happen earlier, if necessary, to allow the work to be completed before calving. For year-round calving herds, time the changes for when there are the least number of cows milking,” he says.

“The earlier you start planning, the better – a two-year timeline is better than two weeks. Aim for the quietest period on farm, be practical to fit in with the farm workload and cow numbers and don’t let daily management slip,” says Mr Davies.