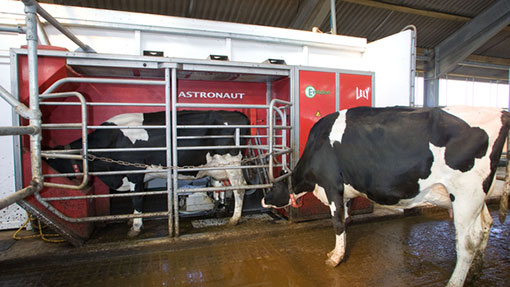 In the north-east corner of Scotland a revolution is taking place on dairy farms, with almost 50 robotic milkers springing up in the region over the past 13 years.

One of the farmers who has invested in robotics is Gregor Colquhoun, who milks 450 pedigree Holsteins under the Bervie prefix alongside his parents Blair and Judy in Inverbervie, Aberdeenshire.

After returning home to the family farm following a stint working full-time as a nutritionist, Mr Colquhoun admits the family had to make a difficult decision: get out of milk for good or invest heavily in a new set-up.

“We had old, wooden kennels and the cows were getting too big for them. They were on their last legs so it was either get out or invest. So we invested.”

At a cost of about £1m for a new state-of-the-art cubicle shed and four initial robots it was no easy decision. Luckily the Colquhouns had been saving for the future. “We had been putting money aside for 15 years so we had savings to pay for the shed, but we had to put the robots on finance.”

Mr Colquhoun says robots seemed the logical solution given the fact skilled, farm labour in Aberdeenshire is never easy to find, with the high wages the oil rigs offer beckoning many workers off-shore.

“Over the years we always struggled with labour so we went down the robotic route. There’s quite a cluster of robotic farms in Aberdeenshire so there are good engineers in the area,” which he says was a big advantage.

Currently he is milking 270 cows three times a day through five robots and an additional 120 twice a day through the farm’s original 20:20 herringbone parlour.

Mr Colquhoun says the parlour-robot combination has enabled him to expand cow numbers without having to invest heavily in robots all at once.

Instead, Mr Colquhoun has increased the herd over the past eight years by steadily growing robot numbers from four to six and upping the number of cows milked through the parlour from 70 to 120.

Although he admits some of the cows milked through the parlour would milk through the robot, he says there simply isn’t enough room. So instead he has strategically targeted cow yields and milking efficiency to drive output.

About one-third of the cows milked in the parlour are “inefficient” milkers and he says the parlour offers him the option to milk them separately. “It gives you that flexibility to pick out inefficient cows: slow milkers with teats too close together or ones that have high teat attachment time.”

He says this helps the robot run more efficiently. “It allows me to maximise milk out of the robot without too much labour input.”

Fresh calvers are also milked through the parlour. This is because they go into straw courts for the first couple of weeks and are not in contact with the robot. He believes one of the benefits of the robots has been the effect on the temperament of the cows.

“Cows on the robot system tend to be calmer, quieter cows,” he explains.

In addition, he says it has saved labour because you get your third milking labour free on a robot system. There are also health benefits associated with milking cows robotically.

“In theory you should get fewer lame cows, because they are not standing in the collecting yard, and fewer cases of mastitis.” But, because they’re proactive in treating lame cows straight away, Mr Colquhoun says they’ve seen no noticeable difference.

“In the parlour we’re only milking them twice a day, so it makes more sense for a cow in early lactation.”

On average cows being milked through the robot are giving 39 litres a day, while those in the parlour average 32 litres.

The same principle has been applied to other areas of management and rations have been formulated to target individual cow yields to drive margin over concentrate.

“If you can target individual cows for feed it is more economical and you will get better yield response and improved feed conversion,” says Mr Colquhoun, who still works part-time as a nutritionist with Harbro.

The cows, which are housed indoors on mattresses and waterbed cubicles year round, are fed the same TMR once a day consisting largely of grass-silage (see above for a ration breakdown).

But a compound is fed to individual requirements during milking.

Cows being milked through the robot are fed two types of concentrates, depending on their stage in lactation, to maximise yields and improve fertility.

Early lactation cows receive a 16% crude protein concentrate, which is high in energy and lower in protein.

“Early in the lactation I don’t want to overfeed protein, I want to maintain body condition and minimise negative energy balance to improve fertility.

“You might not get the same lactation peak yields, but you should get a longer, sustained curve.”

In the second half of their lactation, crude protein is increased to 18%. This ration is higher in fibre and lower in starch.

“This is a non-cereal concentrate, high in fibre and protein to try and stop them getting fat and lazy.”

Meanwhile, the concentrate offered in the parlour is a high-energy cake, containing 18% crude protein.

Precision technology isn’t just restricted to the milking routine. Mr Colquhoun has invested in other areas of management to improve labour efficiencies.

A robot feed pusher is programmed to serve up the silage every two hours.

The state-of-the art shed features side curtains, which are controlled by a climate station on the roof and lift up and down depending on conditions.

“The weather station picks up wind direction and rain and there’s a thermometer inside the shed.”

Over the next 18 months, the family plans to expand the milking herd to 600 and is installing another robot unit this summer to make this possible.

One of his biggest challenges is mastitis, with 64 cases for every 100 cows, so Mt Colquhoun says this is a key area for attention this year.

“Mastitis is probably my biggest inefficiency, which probably stems from overcrowding in the calving area. So we are going to put them in cubicles after they calve and stock it at 80% stocking rate and give them 1m of feed space each as well,” he says.