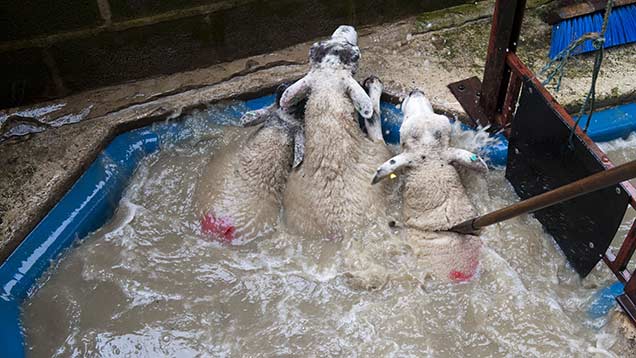 It follows a 30-minute Westminster debate on the issue, which was led by Newport East MP Jessica Morden on Wednesday (10 June).

More than 500 people believe they were poisoned by OP sheep dip when it was compulsory to use the chemicals before the requirement was withdrawn in 1992.

Ms Morden said OP sufferers included her constituent Stephen Forward, from Undy, who started dipping sheep at the age of 17 on his father’s farm in 1979.

“Overall, there is no consistent evidence that low-level exposure to organophosphate has adverse effects on any specific aspects of cognitive function.”
George Eustice

“Over the years there have been lots of arguments, I know, about whether or not people’s illnesses can be conclusively attributed to using sheep dip,” she said.

“In Stephen’s case, I am clear that there is absolutely no doubt. His blood tests, which came from the national poisons unit, prove it.”

Physical symptoms meant Mr Forward could no longer work on the farm. He also developed mental health problems, including depression.

Ms Morden said: “His symptoms would always be worse the day after sheep dipping and he was often bedridden for weeks.”

The Sheep Dip Sufferers Support Group is calling for an independent inquiry and official recognition from the government that farmers were poisoned by OP sheep dip.

Ms Morden said: “Stephen was affected by this at a very young age. I think he and others deserve an apology from the government that he has had to live with the effects for decades.”

Responding on behalf of the government, Mr Eustice said he was sympathetic to farmers who were suffering ill health.

He added: “I also acknowledge that some of those farmers do associate their illness with the use of organophosphate sheep dips.”

But Mr Eustice said it was important to distinguish between poisoning and the separate issue of whether exposure to low levels of OPs contributed to long-term conditions.

“Overall, there is no consistent evidence that low-level exposure to organophosphate has adverse effects on any specific aspects of cognitive function,” he said.

But the government was “not hiding anything” and Mr Eustice said he would be “more than happy” to meet members of the Sheep Dip Sufferers Support Group to discuss their concerns.