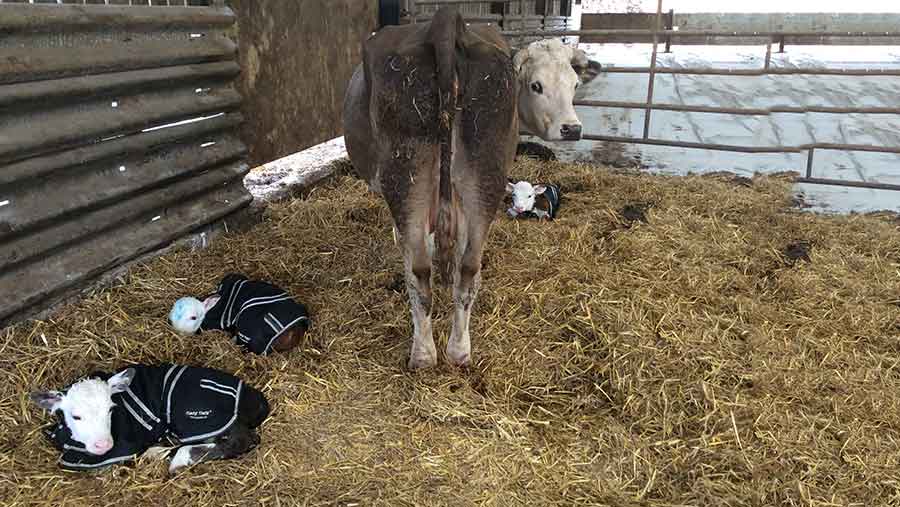 A Simmental-cross suckler cow that was previously thought to be a freemartin defied long odds and gave birth to her seventh, eighth and ninth calves on Friday (11 August).

A rare sight in itself, the triplets came as a surprise to farmer John Drake, as the dam was originally thought to be infertile – after being born as a twin to a bull calf.

See also: 3 steps to get spring-calving cows back in calf quickly

“Freemartinism occurs due to testosterone influence in the womb from a bull twin that causes the ovaries of a heifer twin to not develop properly,” explained Sophie Aylett, veterinary surgeon at Meadows Farm Vets.

“About 92% of heifers born with a bull twin are likely to be a sterile freemartin – and triplets in themselves are extremely unusual – so it is very rare indeed to see such a cow produce so many calves.”

Mr Drake had always presumed the heifer was a freemartin, so never bothered to take the bull away the first time it got in with her.

“A few months later she showed signs of being in calf, and in April 2013 she gave birth to her first set of twins.”

Put to a Hereford bull, the cow – branded “wonder cow”  – proceeded to deliver single calves in 2014 and 2015, followed by a second set of twins in 2016 before delivering a set of healthy triplets at Sleeve Farm, Liskeard, Cornwall, last week.

“When she was scanned, she had only shown to be carrying one calf,” said Mr Drake. “But about three weeks before calving she was as big as the muckspreader.

“We got the vet to check her again, but they couldn’t find another calf – it was a big surprise to have three born.”

The cow had taken very well to her calves, added Mr Drake. “She has never needed any assistance during labour and is a hell of mother – it really is a miracle.”