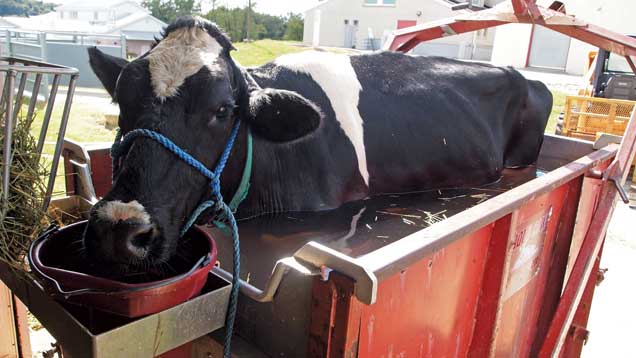 There is a saying that a down cow is a dead cow, but their chances of making a recovery are higher if they quickly back on their feet, as it stimulates blood flow to the legs and prevents further damage.

There are plenty of lifting devices to help downer cows get to their feet, including slings. But a mobile flotation tank is proving to be a useful tool offering a gentle means of lifting cows in the USA and Europe.

When should it be used it and what conditions is the system aimed at?
Knowing when to use an Aqua Cow tank is the crucial skill and the company always advises vet involvement and that only good candidates should be floated.

How successful are they?
Operators who are treating more than 100 cows a year report a 70% success rate when a vet sees the cow first. Two different studies at veterinary colleges show similar results.

Danish dairyman John Lastein built his first cow tank in his farm shop back in 1979. He had the idea while undergoing rehabilitation from a knee injury from a bull in the hospital swimming pool.

Soon after returning home, he and his sons welded their first tank and they saved the first cow they tried.

Over the years he developed the system which he patented in 1995 and it is now made by two US manufacturers.

However, sometimes the cow in the water can reveal a serious problem that wasn’t diagnosed when she was down. Maine vet Pete Caradonna says: “If she cannot stand in the buoyancy of warm water, there is little point in continuing with her.

“Either she has a severe, irreparable injury, or she is too weak because of some underlying illness (mastitis, hypocalcaemia, fatty liver). The point is, if she can be saved, she will stand when the water is added.”

What does the system comprise of?
The Aqua Cow consists of a stainless steel tank which holds more than 1,300 litres of water and has a back door which also acts as a ramp. It is on wheels and can be easily towed on roads wherever it’s needed.

How does it work?
It takes less than an hour to be up and running. Operators simply back the tank to the cow and remove the end doors. The cow is then carefully positioned in the tank using a hoist.

Then the water is pumped in at body temperature water. The cow senses increasing ballast and uses it to stand up. After she stands, the water level will drop. Keep filling to near the top of the front door, or to a comfortable level for small animals.

Cows standing without difficulty and that resume eating should stay in for eight to 14 hours. If the animal struggles and can’t stand easily after 20 minutes, then drain the water. Either you’ve diagnosed a problem needing treatment before floating, or you’ve found a hidden, serious injury that probably can’t be fixed, says the company.

Who is buying and using them?
There are 130 units in use in Europe and more than 250 in the USA.

There are different types of user, including large farms, vet practices and groups of farmers. Some vets take it out to their client while others fetch the cow in the tank and only float at the clinic.

For farmers, one farm may only have a handful of cases in a five-year period, so struggle to justify buying on for their own use. Instead groups of farmers club together and invest in a system.

One example is the Bellfosse Cuma co-op in France which has got together with three other co-ops and invested in the system. As Mickael Heron of Bellefosse explains, it is to help rebuild downer cows after a difficult calving, a metabolic problem or a fall on concrete.

The co-op, based near Bois Himont in northern France, along with the three other co-ops covers 2,350 cows within a 35 km radius. Members pay €0.05 a cow a year to cover the costs, including the gas to heat the water to 37C.

What do they cost?
They cost €6,770 each, supplied from Denmark.

This piece was put together with the help of US manufacturer Aqua Cow Rise System, Vermont.