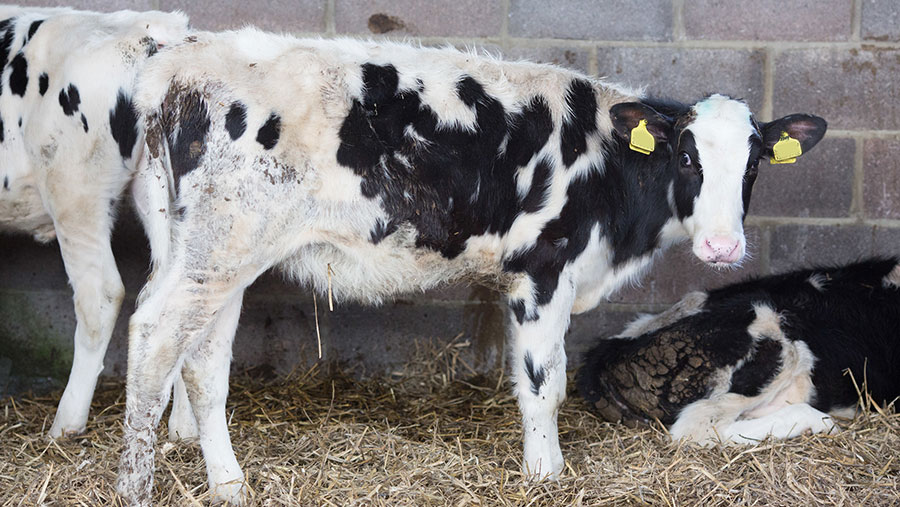 Calf Tracker, a tool developed by XLVets, can detect the influence sub-clinical pneumonia has on calf performance.

The tool monitors the growth and health of calves from birth to weaning, with the weights of calves measured every couple of weeks using a weigh tape and recorded in the online application.

The farm, started using Calf Tracker in September last year. In October, the farmer started to see pneumonia cases in three out of 15 calves – 20% incidence rate.

While this didn’t immediately highlight a major issue as the overall incidence was low, when cases started to increase in November, Calf Tracker alerted the farmer highlighting the impact it was having on growth rates.

Mr Cooper says: “With Calf Tracker you begin to appreciate how bad it is and the knock-on impact a few cases can have.

“In September and October, the average daily liveweight gain [DLWG] was 0.8kg/day, which was on target for the farm, but by November, the average DLWG was 0.49kg and by December 0.29kg/day.”

As soon as it was identified there was an issue, blood samples were taken and bovine respiratory syncytial virus and parainfluenza type 3 virus isolated as the two pneumonia-causing viruses.

Affected calves were treated with antibiotics and the remainder of the calves vaccinated with an intranasal vaccine.

Vaccination saw cases drop quite rapidly and by January the incidence had dropped to just two calves out of 19 – 10%. By March DLWG recovered to 0.71kg/day.

Mr Cooper says: “Vaccination broke the pneumonia cycle, which meant as quickly as it came it was gone.”

Alongside vaccination, Mr Cooper also decided to look at other management issues at the farm.

Tests were conducted to see how successful colostrum intake was in the calves using a refractometer.

Results up to December 2016 showed 84% of the calves sampled had total proteins above 5.5g/dl, which suggests colostrum intakes were good.

Stocking density was also looked at and was decreased slightly.

Mr Cooper explains: “The calf shed is tacked on to the parlour and collecting yard. Because it is a coastal farm and the wind can blow, the temptation is to build fairly well-sealed sheds.

“This compromises airflow on still days and no ‘stack effect’ is achieved on wind still days, resulting in an overload of pneumonia pathogens in the shed.

“While altering the calf shed is a long-term goal, it is costly and wasn’t possible at that time. So, vaccinating calves and reducing stocking density has helped calves thrive in this compromising environment.”

Continuing to monitor calf performance through Calf Tracker, Mr Cooper then noticed a flattening of the growth curve in April this year from birth to 30 days of age.

“When we looked into what this could be, we found that growth rates were picking up significantly after 30 days, possibly as more creep was being consumed,” says Mr Cooper.

So, at this point, Mr Cooper suspected it may be something to do with the milk feeding. Calves are fed on milk replacer and when he weighed out what the farmer thought was 1kg of milk powder, it turns out it was only 800g.

“This shows calves were being underfed by 20%, which is why growth rates were not where they should be in that first 30 days.”

Since May, the farmer now weighs out the milk powder and growth rates have returned to 0.79kg/day.