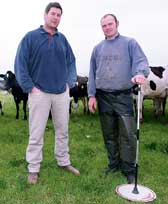 Measuring grass growth weekly allows a Pembrokeshire dairy unit to control concentrate and fertiliser inputs and have the confidence to turn stock onto low covers.

David Weston-Arnold and his herd manager, Calvin Williams, say the information they gain from monitoring pastures on the 170ha grazing platform means they can make better decisions.

“Without this information you tend to run blind,” says Mr Weston-Arnold, who has increased cow numbers from 250 to 370 since he and his wife, Sian, bought Haroldston Farm from his parents two years ago. “On a scale of one to 10 we would rate grazed grass as worth 11 to our system, so we need to be making best use of it. The focus is on achieving low post-grazing residuals all year round.”

Calvin Williams uses a plate meter to measure the grass once a week from so-called “magic day” – the point at which spring growth exceeds herd demand. These data are entered in a computer program to calculate the average cover and growth rates for that week. The information is uploaded into a 12-month grass planner enabling long-term budgeting.

“This is important. We can see what size covers we are going to have in the autumn and whether we will have to forward-purchase feeds or make more silage to prepare for a summer drought or a slow autumn,” says Mr Williams.

This information allows for better understanding of when fertiliser should be applied. “Ideally the pastures should be fertilised two or three days after the cows have grazed them to get maximum use out of the nitrogen. We have been applying 30kg/ha of nitrogen,” says Mr Williams.

Although they rely on contractors to apply the fertiliser, this policy is set to change to give more control. “The contractor struggles to get here twice a week, so we are going to increase labour by half a unit and spread it ourselves. It will give us more control and a faster response,” says Mr Weston-Arnold.

The aim is to close the farm in December at covers of 2000kg DM/ha and open on 1 February at 2150kg, although colder temperatures last winter resulted in the farm opening at 2000kg this year. This means daily concentrate inputs have risen from the usual 3kg to 5kg for two months post-calving/turnout.

The more distant pastures are used by running the herd as two groups. The bulk of the herd (280 cows) is milked twice a day, but the weaker cows and the late calvers are only milked in the morning. “It gives this group an easier time to get back in calf,” says Mr Weston-Arnold.

“Our calving spread has improved. This year we calved 60% of the herd in the first 15 days. Once-a-day milking has helped achieve this.”

The infrastructure in place as cow numbers have increased was also a reason for splitting the herd. Milking the expanding herd in the 12-year-old 20/40 herringbone parlour had become a challenge.

Average yields last year were 3400 litres, achieved from no concentrate input and a large percentage of heifers in the herd. The herd was also dried off earlier than usual because the cow tracks had deteriorated in the poor weather conditions which were damaging the cows’ feet.

There is housing for 200 cows so the remainder of herd is out-wintered on fodder beet. For this reason the herd is supplemented with a Tracesure bolus at drying off due to the iodine deficiency associated with brassica crops.

“The cows are in a better condition than they have been and we have noticed a big reduction in retained cleansings. We will be doing further liver biopsies to determine if they need a bolus at mating too,” says Mr Weston-Arnold.

Jerseys have been used as a tool to remove the Holstein influence from the herd which is moving towards a New Zealand Friesian-type cow, with Jerseys being retained for hybrid vigour.

Mr Weston-Arnold credits many factors with running a successful spring grazing system, but rates benchmarking grassland production as essential to the system.

“By planning and budgeting and setting and achieving targets we can extend the grazing season. Monitoring means we know how to react to situation that have been recorded previously,” he says.