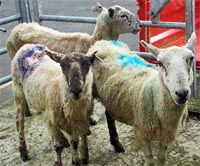 High culling rates of young ewes before the end of the productive lives (involuntary culls) are a major financial loss to farmers. The cost differential between a replacement gimmer and ewe culled after only one to two crops of lambs could be as high as £50-£60 especially if the latter sheep is in an emaciated state.

Can the number of sheep culled before the end of their productive lives be reduced in your flock thereby increasing your income?

There are several important causes of weight loss in adult sheep necessitating thorough investigation in order to prevent/control them.

Farm records will identify those sheep that have had a vaginal prolapse necessitating culling. Unlike vaginal prolapse, uterine prolapse rarely occurs in the same sheep during a subsequent pregnancy and these need not be culled. Chronic mastitis will be identified by handling the udder of all sheep immediately prior to the breeding season. The normal udder will have completely involuted by two to three months after weaning chronic mastitis is identified by a hard swollen udder which may contain several softer golf ball-sized abscesses which may discharge pus. Lame sheep that have not responded to treatment must be culled noting that such sheep will rarely be fit for transport to market or slaughterhouse.

Determining the reason(s) for poor condition in the proportion of the flock culled prematurely necessitates thorough veterinary examination. There are numerous reasons for weight loss in individual adult sheep which your vet will investigate including:

Debility is a major welfare concern.

Parasitic gastroenteritis and chronic fasciolosis are diagnosed by demonstration of eggs in faecal samples. Broken mouth or undershot/overshot jaw is readily identified by examination of the incisor dentition. Abnormal molar dentition can be much more difficult to recognise and quidding is not always present. A mouth gag and pen torch are often necessary to fully examine the cheek teeth.


Unlike cattle, sheep affected with Johne’s disease rarely have watery diarrhoea. Note the emaciated condition and poor fleece. Blood and/or faecal samples, in conjunction with postmortem examination, are important to establish diagnosis.

Parasitic gastroenteritis and chronic fasciolosis are controlled by strategic management policies developed in conjunction with the farmer’s own veterinary surgeon who has local knowledge of the disease risks.

There are no specific prevention measures for broken mouth but such sheep often lead productive lives when there is abundant grazing and adequate supplementary feeding during periods of high metabolic demand such as late gestation and early lactation. There is no treatment for molar dentition problems.


Chronic pneumonia caused by bacteria may respond to a course of antibiotics prescribed by a veterinary surgeon.

Johne’s disease (paratuberculosis) can be greatly reduced by vaccination but this and should be fully discussed with the farmer’s veterinary surgeon.