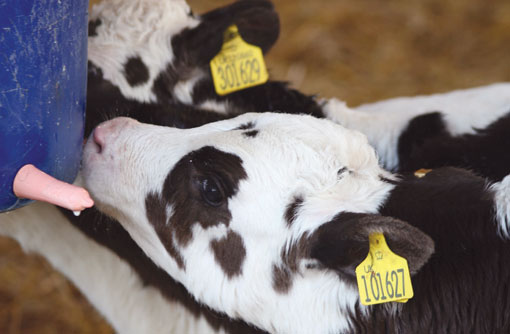 Improved mammary development, higher milk production and more robust dairy cows – this can all be achieved through a new approach to heifer rearing. Gemma Mackenzie finds out more.

Dairy producers can boost yields by up to 8% in a heifer’s first lactation by improving nutrition in the first few months of a calf’s life, and working towards reversing “chronic under-nutrition” in youngstock.

At present the average dairy heifer gets fed 500g milk replacer a day, but by switching to feeding 900g a day producers can set the animal up for increased productivity in later life.

And according to nutritionist John Twigge, from Frank Wright Trouw, this approach of increased milk feeding, coined as “metabolic programming”, is paramount to achieving the most from replacements entering the milking herd.

“All we are trying to do with this approach, is get rid of the chronic under-nutrition in calves in the current system,” he says.

What is metabolic programming?

The approach is based on nutritional studies in human beings, which looked at malnutrition in populations following the Second World War, and found that under-nutrition in gestation or early life had negative effects on metabolic health in later life.

“We began with the concept that the future of a cow is dictated by what it eats as a calf, and through this focus on improved early feeding, we found you are activating systems in the animals which you would probably never activate later on,” explains Mr Twigge.

Although in theory the approach requires stimulus both pre-partum and post-partum, nutritionists decided to only look at the young calf, as under-nutrition in dry cows is generally not a problem in the UK.

Mr Twigge says: “Our research flagged up that under-nutrition in youngstock is a big problem in the UK; on average most farmers only feed 500g milk replacer a day.

“So we started looking at feeding milk replacer in the same quantities as a suckler calf would get; they feed six to 10 times a day, and at between 20 and 30 days old it will consume anything between 16-24% of its body weight.”

What should producers be feeding dairy heifers?

To achieve the same nutritional effect as a suckler calf feeding on the dam, the “metabolic programming” approach calls for dairy heifers to be fed 900g milk replacer a day – something which Mr Twigge says seems to “light up pathways” in the animals.

“Farmers should be looking to finish this high dosing of milk powder at around nine to 10 weeks otherwise you are just laying down fat in the animal,” he adds.

“And based on studies previously done looking at youngstock growth rates, we found a trend towards a lower age at first calving and more milk production where the calves have had a better growth rate in the first three months.”

In addition to improved growth rates, Mr Twigge says a higher intake of energy in the first few months results in more mammary tissue being developed, as well as a reduction in the number of respiratory treatments required.

“Our contention is if we rear calves on a higher level of nutrition, there will be a downward shift in the need for antibiotic intervention for respiratory problems. I think the animals are just more robust and sturdy when they have been fed more,” he adds.

“We would recommend feeding ad-lib concentrates throughout this milk feeding period, with the aim of weaning the animals when they are consuming at least 1.8kg/day concentrates,” he adds.

However, despite the benefits from this feeding approach, Mr Twigge says farmers must not be seduced by the system because it is not the answer to all problems in youngstock rearing. “The one thing we must not do is forget the basics; this approach should be seen as an addition to everything else.”

In particular, he says ensuring calves get the correct amount of colostrum is paramount. And in terms of milk replacer type for this type of rearing system, he recommends skimmed milk replacer containing caseine, as found in colostrum.

What are the financial benefits?

Feeding more milk replacer is an additional cost, but this is recouped as a result of increased milk production, longevity and reduced medical and rearing costs, says Mr Twigge.

In fact, he says producers can gain up to £148 a cow a year extra profit as a result of reduced rearing costs (because heifers are calving earlier), higher milk production (8% in the first two lactations) and better durability (studies showed a 47% lower culling rate until the second lactation).

“Longevity is the key to this financial gain, as well as reduced heifer rearing costs. And the extra milk produced in the first lactation covers the cost of the additional milk powder,” adds Mr Twigge.

How to start metabolic programming your heifers

* Provide ad-lib access to concentrates, forage and water, and wean when calves are consuming at least 1.8kg/day concentrates

* No need for an expensive, high protein milk replacer on this system

The Thomassons at Aston Low Hall Farm, Cheshire, have been using the ‘metabolic programming’ approach on replacement heifers for their pedigree herd, Astlowhall Holsteins, since November last year.

And according to stockman Tom Adams, growth rates have already improved and calves are requiring less medical treatments.

“We started doing this in November because I didn’t think the calves were growing to their full potential, and we are now trying to exploit the full genetic potential of the calves,” he says.

“Before we were feeding them about 500g of milk replacer a day but now they are getting 900g, and growth rates have improved from 0.54kg/day to 0.86kg/day. I can see the calves are healthier and we are not having to treat as many – they are growing a lot better.”

On the additional cost of feeding more milk replacer, he says the lure has been the drive to increase profitability in later life, with the aim of increasing growth rates to get heifers calving down earlier.

“These are the future milkers, so the more we can do now the better we can do for them in the future. We are going for animals that will last longer, and obviously the more milk we can get them to produce the better for us,” adds Mr Adams.

As part of the new approach, he is producing a chart for every pen of calves, with the help of HST calf advisor Rachael Kennerley, with data such as weight gain, feed costs, feed efficiency etc. And growth rates are monitored by weighing the calves, six times up to bulling, to identify any problems.

“We can pick up on any decrease in daily live weight gain, and use the information to see where we need to improve. Also by putting a cost to everything we can see how much heifers are costing us to rear,” he says.