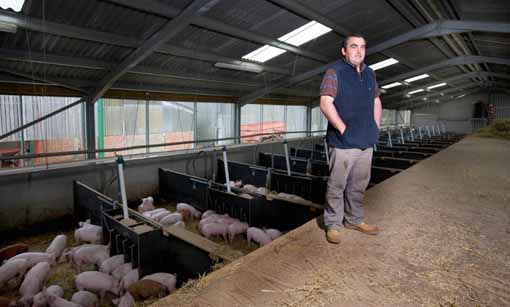 A Suffolk arable grower has built high-grade housing to expand his pig enterprise after securing a funding package that pays him for each pig place in the building.

Paul Howland, who runs a 300ha arable business at Shingle Hall, Brampton, in partnership with his father, Maurice, is busy for six months of the year but there were gaps he was keen to fill with an additional enterprise.

Mr Howland’s family had kept pigs on a small scale since he was a young boy and his interest in this sector made it an obvious choice. But it needed significant investment in housing. “The sheds we had were not ideal for pigs so we needed to spend a lot of money to bring things up to spec for the numbers we were looking at,” he says.

He invested £120,000 on state-of-the-art housing for rearing 750 pigs from weaning to finishing. His Gold Membership agreement with BQP gives him a weekly income of 57p a pig, topped up with a weight range bonus of £1.50 a pig for animals finished at between 75kg and 85kg. The new build agreement also pays him £3 a pig place a batch either over a five-year period or for 11 batches, whichever comes first. This, says Mr Howland, provides a stable income at a time when the business is in its infancy.

To meet the capital cost of the shed he borrowed money over a 10-year period. He predicts that by year five, when his BQP new build agreement ends, he will be in a strong position to cover those payments.

One of the bonuses of the package is the payment of the 47p a pig place a batch regardless of how many pigs are in the unit. “I’m paid for the whole shed while I have pigs in there, whether or not the space is full,” he said. “The shed holds a maximum of 750 pigs but, as we pull out groups to sell, that number goes down until the next batch comes in. This agreement gives me a consistent income.”

Mr Howland opted for a shed with very high specifications to meet the stringent welfare requirements of BQP’s customer, Waitrose. A side curtain ventilation system gives full control of the temperature inside the shed and it protects the pigs against the weather.

This not only maintains a healthy environment for the pigs but it gives Mr Howland complete control, even when he is away from the farmyard. “There are sensors inside and outside the building which take a reading every 10 seconds, so if I’m sitting on the tractor at harvest time and it suddenly turns hot I don’t have to keep running back to the pig shed. The computer controls the curtains so it does the job for me.”

Pig health is excellent, he adds. “When you invest in a new building health will inevitably be good but I am confident that as the building ages the spec is such that it will continue to give us good results. It will stand the test of time.”

Production manager, Howard Revell, says the five-year contract and payments reflect the level of investment by the farmer. “The structure of the contract really facilitates the confidence and support to enable farmers to progress,” he says. “The offer is still open and we are always looking for suitable partners to work with.”

The package includes set-up advice on planning and design and guidance is given on costings and finance and also on operating the business. “Generally prospective farmers get to meet others who have recently undertaken a new build and this helps not only to promote the project but also to highlight areas to reduce hassle and save cost.”

The scheme has worked so well for Mr Howland that he is in the process of constructing a second shed which is scheduled to be completed by the spring and will enable him to increase pig numbers to 1,460.

The pigs arrive on his farm at 7kg and they are fattened to finishing. He employs a worker, James Balls, who has been on the farm for five years. “James is totally involved with the day to day running of the pig business and I can confidently leave him to run the unit if I am busy elsewhere on the farm,” says Mr Howland.

The new enterprise has fitted in well with his existing farming activities, although there are inevitable flashpoints in the season. “It can be a bit hectic at harvest. This year the pigs went two days after drilling which gave us an opportunity to wash and disinfect the shed,” says Mr Howland. “There are companies out there that will do this job but at the moment that’s an expense I’m hoping to avoid as if I wash down myself I receive 45p for every pig place.”

The pig unit is bedded with home-grown straw and the pig manure is used to fertilise the arable ground. “In a way it’s going back to the olden days when farmers had crops and some livestock and used their own straw and muck,” says Mr Howland. “We spread the muck on 30ha and when the cost of artificial fertiliser is as high as it is we are making real savings.”

He credits his father for fully backing his decision to add a second enterprise to run alongside the arable business. “My father’s philosophy has always been that still waters run stagnant. He started with nothing and got the farm to where it is. We couldn’t expand the arable operation because of competition for land, but what we could do was create another business using what we had,” says Mr Howland.