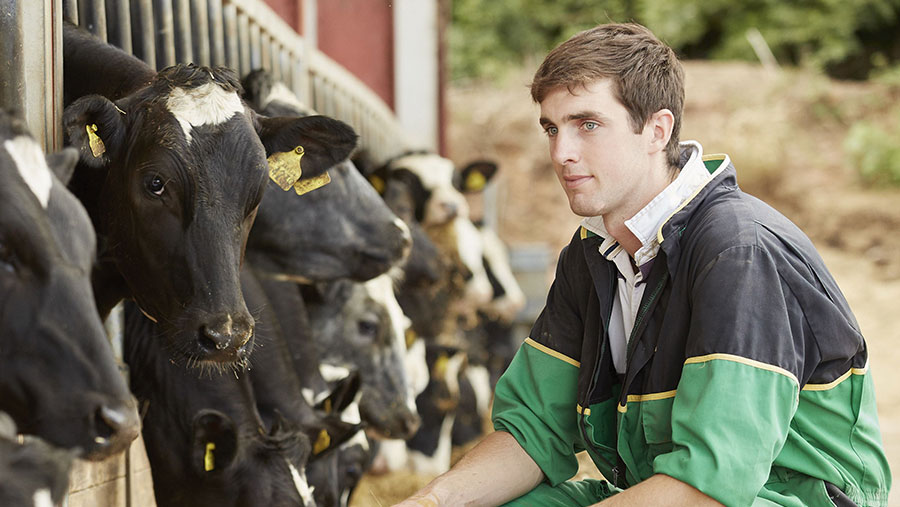 Dairying business courses are giving new entrants the confidence not just to start out in the farming sector, but also to thrive in it.

With newly acquired business acumen under their belts, some of those that completed Entrepreneurs in Dairying in 2014 have gone on to partner with established farmers or launch their own enterprises.

Others have returned home with an enhanced understanding of the business and management side of the job.

Entrepreneurs in Dairying courses – launched in 2014 – begin again in September at colleges up and down the UK.

Over the course of the scheme, students learn about finance, business plan development, staff management and optimising milk price.

Farmers Weekly spoke to two graduates of the scheme to see what lessons they had taken from the classroom and applied on farm.

Share farmer Sam Carey, a dairy farmer’s son from Pembrokeshire, enrolled in Entrepreneurs in Dairying at Gelli Aur College in Carmarthenshire in 2014.

“I was in north Wales at the time, so I had to travel three hours there and three hours back,” he says. “But it was worth it. I wanted to get ahead in dairy farming. I was committed.”

Within weeks of completing the course, Sam partnered with Carmarthenshire farmer Richard Price – owner of the 7,000ha Rhiwlas Estate in Bala – to establish a new, grass-based, 500-cow spring-calving dairy herd on 200ha.

Sam graduated from Harper Adams University in Shropshire in 2011 with a degree in agriculture, before travelling to the USA – specifically Arizona – and New Zealand, where he worked on beef, sheep and dairy farms.

Having cut his teeth milking, shearing and fencing in New Zealand, he returned to the UK with the dream of starting his own dairy enterprise.

“It was then I came across the concept of share farming,” says Sam. “I wanted to start a business and I wanted it to be profitable.”

It was in 2014, while working for dairy joint-venture pioneer Rhys Williams of Padog Farms, Conwy, north Wales, that Sam signed up for Entrepreneurs in Dairying.

For a while after that, Sam split his time between Mr Williams’ farm in Conwy and Richard Price’s farm 25 miles away in Bala, where he was managing the unit’s conversion from beef and sheep to dairy.

The partnership with Mr Price developed quickly. “We first met in January 2014, began converting from sheep and beef to dairy in March 2014, and milked our first cow in January 2015.”

Ownership of the newly established dairy enterprise is split 50/50 – mirroring the purchase of cattle, which was split down the middle.

Mr Price takes home a majority of the profit from the business, which reflects his additional investment in infrastructure.

See also: Things to consider before entering a joint venture

As well as receiving the remaining profit, Sam is paid a salary.

Given each of their roles in the enterprise – Sam managing the day-to-day running of the farm and Mr Price handling the administrative side of the business – settling the terms of the share-farming contract was relatively stress-free, he says.

“The beautiful thing was that we both had what the other needed to progress our business,” says Sam.

“He wanted to convert from sheep and beef to dairy, and I had the expertise to do it. So it was easy for us to come to an agreement.

“We had agreed on contracts and how thing should be shared out from the onset – before we even started converting.”

Two years on, Sam continues to manage all technical aspects of the business.

“I pretty much make all day-to-day decisions on the farm, but with anything strategic we discuss it,” he says.

Weather permitting, their 500-strong herd grazes from February to November. Grass or silage accounts for about 80% of the herd’s diet throughout the year.

“The biggest driver of profit is grass grown and grass harvested,” he says.

Assisted by the unit’s two full-time and four part-time staff, Sam measures grass weekly and carries out tests on soil and P and K annually. He is targeting 13 tonnes of grass DM/ha and hopes to reduce concentrate feeding to less than 750kg a cow.

“We’re always trying to better ourselves,” he says. “We’re focused on fertility and growing more grass.”

He aims to have 90% of the herd calved in the first six weeks, with calving scheduled to start at the beginning of February.

“We want to lower our cost of production. We’re not going to increase cow numbers, but milk production will increase because at the moment the majority of the herd are just second calvers.”

Production last year averaged 3,800 litres a cow (all first calvers), with levels of fat and protein at about 4.5% and 3.6% respectively. Milk is sold to South Carmarthen Creameries. Next season, Sam expects this production average to increase to 4,200 litres, and as the herd matures to 5,500 litres.

Reflecting on his time on the Entrepreneurs in Dairying course, Sam says it provided everything he needed in terms of business and financial advice.

“Networking, meeting all these people – consultants and people from banks – gave me access to a great wealth of knowledge,” he says.

He adds that he would recommend it not just to new entrants, but to established farmers looking to meet others with a progressive outlook.

Former professional rugby union player Mark Lee spent 10 years in the King’s Own Scottish Borderers regiment – including five years as an army lawyer – before an opportunity arose for him and his wife, Jenny, to enter the farming sector.

Before joining the army, Mark played rugby union at a professional level, captaining Scotland Sevens at the 2002 Commonwealth Games. He went on to captain the British Army and Combined Services teams.

In 2012, he and Jenny moved to Wigton, Cumbria, to run 140ha Park House – her family farm – in partnership with her parents.

With no previous agricultural experience, Mark started from scratch, throwing himself into milking the farm’s 220-cow Holstein herd.

See also: How new entrant has built up a flock of 600 sheep

Using a resettlement grant from the army, Mark enrolled in a number of courses to develop his practical farm skills, including artificial insemination and hoof trimming. Then in 2014, hoping to improve his understanding of the business and management side of farming, Mark signed up for Entrepreneurs in Dairying.

“It was worthwhile,” he says. “I wanted more business know-how and to meet more people in the industry.”

It gave him a clearer vision of how to get the best out of the business, and underlined that every decision made is a business decision, he says.

“The lessons we have learned contribute to what we do on farm to make it a success.”

Since Mark completed the course, the Lees have begun a transition from their current year-round calving, indoor system to a spring block-calving, grass-based system.

“We are in the middle of a big change from a high-input indoor system to a low-input grazing system,” he says.

Around half the herd (those PD+) is currently on grass, producing an average of 15 litres a day. Turned out in April, the outdoor unit will remain on grass until the end of September, weather permitting.

Recently calved cows remain inside, subsisting on a TMR-based diet and producing 38 litres a head daily on average. All milk is sold to Arla Foods.

Mark and Jenny, who are in the process of installing cow tracks and troughs, hope eventually to have the entire herd grazing from March until November.

Mixing with other farmers on the Entrepreneurs in Dairying course – 75% of whom, he estimates, were grazing farmers – further encouraged the Lees to make changes to their system, says Mark.

Diversification was also a topic of discussion on the Entrepreneurs in Dairying course, and drove Mark and Jenny to set up a wedding and conference venue on site.

“When you compete, and hopefully succeed, it becomes part of your mindset. What I have learned is that it is not unique to sport,” says Mark.

“You meet these guys who have made a success of what they do and have this burning, intense desire to be successful. It’s the same thing I have seen in some of the guys I mixed with in the sporting world.”