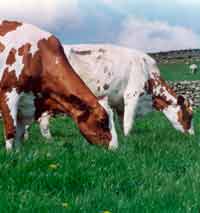 A new red and white bloodline has topped the Ayrshire list in DairyCo’s April “other breeds” bull proofs run.

G Edbo steps in to the number one position as a result of a substantial improvement in his Lifespan Index. Now based on actual daughter survival, his Profitable Lifetime Index climbs to £195. However, users should note his higher-than-average Somatic Cell Count Index, which will be off-putting for any breeder seeking improvement in this trait.

Although ranked as an Ayrshire, Edbo is in fact of Swedish Red breeding, while second placed Brieryside Golden Sand carries predominantly Holstein blood. In third place, Asmo Tosikko is a Finish Ayrshire which excels in reducing cell counts.

With several red breeds eligible for these rankings, any Ayrshire breeder is advised to contact the breed society if it’s important for them to register the progeny as a pure Ayrshire, as it’s not always possible to do so with some of these bulls.

Danish Jersey, DJ Zuma, now shares the top spot in the Jersey rankings. This Q Zik son, out of a Fyn Lemvig dam, transmits strong fitness traits across the board and combines this with good functional type traits. Last time’s leader, Sunset Canyon Anthems Allstar, remains in joint first position. Rounding off the top three is DJ Broiler, which excels for daughter fertility with a Fertility Index of +4.2.

The Friesian rankings remain stable at the top with Deangate Osbert and Deangate Tarquin holding on to the top two places. Making his debut in the top three is Lakemead Randolf, which is a maternal brother to the popular Rancher, in fifth place.

Leaders for the other breed rankings are:

• Prossli for the Brown Swiss breed, with a very good Lifespan Index;

• Sniders Option Aaron, who is number one on Guernsey Genetic Merit;

As always, I’d remind breeders that you cannot directly compare genetic indexes for one breed with another, says Marco Winters, head of genetics for DairyCo.

“The figures for each breed are calculated to relate to that breed average, so it would not only be meaningless to compare figures across breeds, but could also be completely misleading.

“I appreciate this may be a temptation for those considering cross-breeding, but DairyCo is able to produce a conversion formula to allow any breed to be compared with another for anyone in this position.”

You can also read more about using and interpreting breeding indices.