The highest rated for type merit in the top 10 at 2,53 points (published 4 April ), the chart topper boasts a very different back pedigree to many, consisting of Rubicon-cross Shotglass-cross Shamrock-cross KHW Goldwyn Aiko.

High milk components (+0.18% fat and +0.08% protein) and good daughter health and fertility give Agronaut a profitable lifetime index (PLI) of £793. 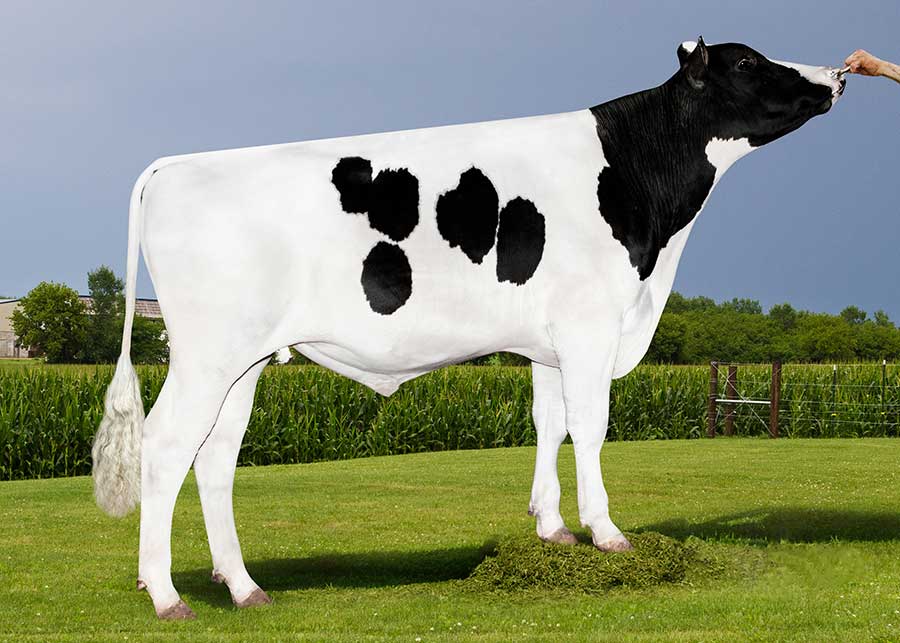 Perseus herdmate Westcoast Guarantee is third. He is from the British Columbia-based herd, which started seven years ago and combines high milk volume and solids with a somatic cell count index of -29.

Guarantee, who is a Bryceholme SS Boastful – himself a Supersire son – excels at the new mastitis predicted transmitting ability (PTA), with a score of -5.

Another Canadian newcomer – Progenesis Padawan – sits in fourth position. This son of S-S-I Montross Jedi transmit high milk volumes and weights of fat and protein, has a fertility index of +15.1,  a PLI of £761 and type merit of 2.51.

Lying in fifth place is the first UK bull in the rankings, which is the exceptional all-rounder and Penmanship son Prehan Lancaster (PLI+759) from Northern Irish breeder Stuart Smith.

This bull’s maintenance index is -2, indicating his daughters will cost less to maintain than the breed average. His dam – Prehen Shamrock Lady VG85 – gave 9,755kg at 4.1% fat and 3.13% protein as a heifer.

Click on the link to jump to each section

De-su Holsteins have produced De-Su Rookie 11057 (PLI £669), the number one daughter-proven sire on the UK market. This moves the Bookem son up 44 points over the past four months.

Second in the rankings is former number one bull Lavaman (PLI £635), who has nearly 800 daughters in the UK and a 99% reliable production index.

Tollenaars AltaMicro remains in the top five, having his positioned strengthened by UK daughter information. He brings a fertility index of +17.7 and a PLI of £625.

At number five is Kings-Ransom Erman (PLI £623), who has been overtaken by steadily improving sires. He was number one in December 2016.

British Friesian sire Catlane Chad remains number one outside the Holstein breed (PLI £496). He rates highly for low cell count transmission (SCC index -16) and daughter mastitis resistance, which scores at -5, one of the the best in the breed.

New into the top five is Skyhigh Patrol (Rocket 3 x Glen Albyn), transmitting the highest milk volume of the top five and offering a PLI of £290.

In third place is Sunset Canyon Dazzler (PLI £516), which has benefited from newly included genomic information included in Holstein indexing for many years.

A Swedish Red, which qualifies to rank on the Ayrshire list, has continued to lead the rankings. VR Gobel (PLI £578) has a good lifespan index (+0.6) and mastitis PTA (-3).

Newcomer VR Hattrick (PLI £529), the progeny of Haslev and Gunnarstorp comes into the top two as a high production sire.

High daughter fertility bulls VJ Hilario and VJ Linkremain in the top five and are joined by VJ Juris and Sunset Canyon Dazzler.

In seventh is noted Friesian Catlane Caleb, the first of two British Friesians in the top ten, the other being Catlane Chad in 10th.