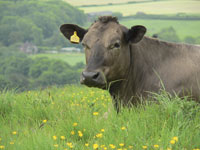 Three finalists made a formal presentation in London on 1 April on how they hoped to develop their career in dairying and how the industry could be better structured to meet the needs of the market place.

RABDF council member, Andrew Snodgrass, who was part of the judging panel, said he was impressed with all three of the finalist as they were able to “articulate themselves well” – something he said was important for a winner of the award. “But Richard stood above the rest as he was able to put across a well-developed and considered argument and he was focussed.”

Mr Young, from Omagh, County Tyrone, was not from a farming background but had worked on a farm since he was 10 years old. He took a less traditional route to gain qualifications, firstly taking an ND in agriculture and then an HND in agriculture with animal nutrition at CAFRE, Northern Ireland.

“Going down this route gave me the basic knowledge and also allowed me to gain work experience along the way. It may have taken me longer to get my qualifications, but I have experienced a lot more,” said Mr Young.

Mr Young, who is in his final year studying for a BSc in agriculture and animal production science at Newcastle University, hopes to go on and focus on research in nutrition. “Nutrition is an exciting subject as it can influence lots of things, such as fertility and efficiency and more importantly, can influence greenhouse gas emissions.” Mr Young hopes to go on and do a PhD in the subject area.

The two runners-up were Anita Simmons, Clevedon, Somerset, who is a mature student at Bridgwater College, and William Bolton, County Derry, who is studying agriculture technology at Queen’s University, Belfast.