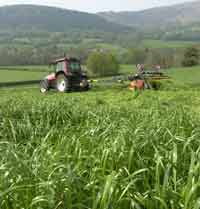 The NIAB Recommended List for Grass and Clover 09 has been released and the future looks bright for its continuation.

During 2008-2009 there were growing concerns the reductions in levy collected would leave a shortfall for establishing trial data for the 2010 NIAB list.

Fortunately, DairyCo and EBLEX have agreed to help fund the scheme over the next three years, with support offered from the NFU in 2009-2010.

This will avoid a substantial increase in levy on seed, which could see many levy payers drop out, said Jessica Buss, British Grassland Society director at Grassland UK.

“If this scheme ended, farmers would get no more independent variety data after 2009. BGS feared this would see an already competitive market for forage seed become even more price led, with no quality safety net.”

The knock-on effect would be it would become more difficult to bring new varieties to the market, reducing the finances for plant breeding and slowing genetic progress.

“We recognise, to be successful, grass seed levy payers must see clear benefits to, so they get value for their levy,” said Ms Buss.