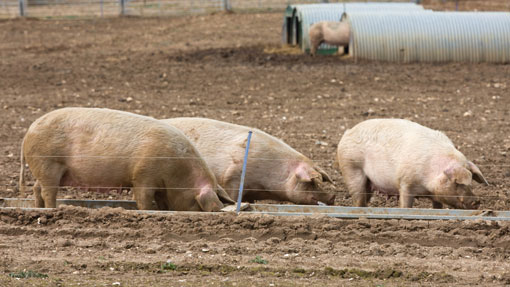 A focus on breeding protocol, nutrition, and recording and measuring has helped raise productivity on one Norfolk pig farm.

Changes to the overall breeding management at a Norfolk outdoor pig unit are improving productivity, with an average increase in litter size of three pigs.

Three years ago Simon Watchorn and his vet Steve Young reviewed the system on the 600-sow unit near Earsham.

They carried out a “root and branch” review and breeding was identified as a weak area.

The fault wasn’t with the breeding stock, semen, the vaccination programme or ill health, but in the protocols and routines associated with sow management at the pre-mating stage.

One of the key changes implemented was to leave the sows after artificially insemination to stand quietly looking at the boar through a vertically barred divide for about 10 minutes.

This helped to prolong the release of oxytocin to speed the passage of semen through the reproductive tract.

“There is better fertilisation if the sow doesn’t see the boar until that point, there are more surviving sperm and this results in bigger litters,’’ says Mr Watchorn.

Increased productivity at Park Farm has been confirmed with the average litter size increasing from eight to 10.9 in the past three years.

The boars live with the sows after service has finished and are rotated two or three times a week.

Only entire males with the same genetics as the AI sires are kept. “We like to keep the genetics constant to standardise the genetics of the finishing progeny,” says Mr Watchorn.

The gilts are Landroc and the sires a synthetic boar developed from the purebred Rattlerow HC Large White and the extreme muscled European lines of the Rattlerow Seghers selection programme.

Changes have been made to the serving protocols after a period of intensive training with Ian Gillies of Rattlerow Farms. The sows are served on a Monday afternoon and on Tuesday, Wednesday and Thursday mornings.

“Ian came here when we were serving on a Monday afternoon and he was able to explain why certain sows were not ready to be served and the signs that dictated that,” recalls Mr Watchorn.

“Most of the issues he raised were down to management and protocols. Our service management is now much more consistent, precise and predictable. He gave us the confidence to say ‘no, that sow can be left to be served the next day’.”

There is now a focus on identifying the start of first-standing heat, as inseminating too early or late results in smaller litters and lower farrowing rates.

Sows were fed a lactating diet prior to service, but this has been replaced with a specially formulated flushing diet containing three different organic acids, sugar, omega 3 fats and extra specific vitamins.

This diet, produced by Zarkos-Smith Associates, is fed ad- lib from weaning to service.

Andrew Zarkos-Smith says the diet is based on research which shows sugars boost the insulin levels, thereby increasing the luteinising hormone that causes the sows to ovulate more vigorously.

As a result, greater numbers of eggs are produced for potential fertilisation.

“A disadvantage of giving a lactation feed pre-service is that it will stimulate milk production. At this stage it is necessary for the udder to dry up,” says Mr Zarkos-Smith.

The inclusion of the acids and the fact the diet is formulated on an anion-cation balance causes the urine to become more acidic.

This reduces uterine bacteria, so at insemination there is less chance of infection. “Omega 3 fats have a positive effect on the fertility of all classes of livestock,” says Mr Zarkos-Smith.

This diet is fed to the sows for four days after weaning and from there on they revert to a dry sow ration.

Improved herd productivity has allowed Mr Watchorn to be more selective with the animals he retains for breeding. “Now we have got a little better at getting the sows pregnant we can get rid of a lot of the poorer performers in the herd,” he says.

The whole system is underpinned with recording and measurement, allowing for evidence-based decision-making.

“We record a robust set of numbers and this enables us to identify which areas of our business need to be addressed. This allows for sows to be culled for age and poor performance,” says Mr Watchorn.

A record is kept of every service, farrowing and weaning and daily liveweight gains. The information is collected manually and entered weekly into the farm’s computer system.

“I like a manual bridge between the information gathering in the field and it being entered into the computer.

“I think that is important because it allows us to make certain that the figures make sense when they come through. That might not be the case if the data went straight into the computer,” says Mr Watchorn.

“We keep a record of all the feed invoices, the incoming gilts, ear tag numbers, vaccinations and dates of birth. Every time an animal is moved that movement is recorded and the animal weighed.”

The increase in productivity isn’t entirely down to management changes. Mr Watchorn says the gilts he now buys are more prolific.

He also believes pig welfare has an important role to play in productivity. Wallows are provided in individual paddocks. “Sows need help to control their temperature, especially when their metabolic rate is at its highest in the latter stages of pregnancy or lactation and the ambient temperature is high,” he says.

The farrowing arcs are insulated, too, to keep the pigs cool during the summer months. The huts are turned in the summer to face north. This means the shade created by the arc falls at the door, encouraging the sow to return to feed her piglets. Straw bedding is kept at modest levels during the summer, too.

“We do as much as we can to keep the sows cool three weeks after service – it is really important for implantation.

“Attention paid at this time gives them the best opportunity to implant as many embryos as possible,” says Mr Watchorn.

The increase in productivity has made the system at Earsham Park Farm more sustainable, but Mr Watchorn reckons it is not specific to his system.

“There has been a general improvement in breeding herd health since the industry has dealt with the PCV2 virus,” he says. “In the UK we killed 10 million finished pigs in 2012. The last time we did that was in 2002 and we now have 15% less sows nationally.’’