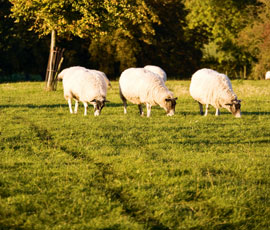 There are big opportunities for sheep producers to increase profits by making better use of grassland, according to SAC sheep specialist Rhidian Jones.

“Using the grass that’s available more efficiently with appropriate stocking rates and avoiding grass “getting away” at certain times of the year, through being undergrazed, is only part of the story,” said Mr Jones.

“I know a lot of sheep farmers don’t think they can take a field out while it’s re-seeded, particularly where fields are very large. But working with smaller areas – say 10-acre fields rather than 40-acre fields – gives a perfect opportunity to re-seed without any major impact caused by the temporary loss of the grazing.

“And when you consider that a re-seed should be able to give you at least two to three tonnes more dry matter an acre compared with an unimproved ley, it’s well worthwhile based on the cost of one tonne of forage dry matter having the same feed value – and probably a higher protein content – as a bought-in compound.”

Mr Jones referred to a flock he’s been monitoring where a plate meter measurement taken last week of a field that was re-seeded last year recorded 2,700kg/ha of DM compared with 1,100kg/ha of DM on unimproved grazing.

“That’s double the amount of grass and it’s not just a case of more grass. There will be more grass produced in the spring and later in the autumn and the quality of the grass – in this case it was a ryegrass/clover mix – will have a much higher digestibility.

“I know some will say these re-seeds are more hungry, but these are the fields that will give a really good response to nitrogen ­compared with throwing money away feeding weed grasses in worn-out pastures.”

Mr Jones believes a greater awareness of the impact of improved grassland management and a willingness to apply new strategies to the role of grass in sheep production can significantly influence profitability.

“I know some fields may be too far away, too stony or north facing and so don’t readily lend themselves to improvement, but there will be other, more productive fields  closer to home with better soils and are south facing. These should be exploited to the full in terms of their ability to grow grass more efficiently, grow more of it and produce grass of higher feed value.”