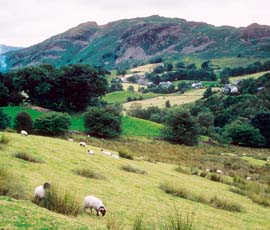 The National Sheep Association (NSA) has called for more recognition for the environmental benefits of upland sheep farming, in light of CAP greening proposals currently being discussed at EU level.

Speaking at the launch of their new report ‘Complementary Role of Sheep in Less Favoured Areas’ the association called for a scoring system to prevent producers already delivering environmental benefits suffering as a result of the greening plans.

Development officer for the association’s Scottish region, George Milne, said:  “Many of these extensive hill farms are already delivering good environmental benefits and to burden them with extra cropping and grazing rotations would be absolutely ridiculous and could actually result in a further decline in livestock.

“We would like to see a way of measuring what these farmers are already delivering to make sure they are exempt from many of the greening proposals put forward.”

He said the proposals for 7% set-aside were a “real concern” for upland sheep producers. “There is not need to have set-aside if your farm is delivering these benefits already.”

NSA national chairman John Geldard added:  “We have had these proposals thrown at us from Brussels which is not acceptable. The industry needs to work together with the government to redistribute modulation funds back to farmers; that money would go a long way to help level out the situation.”

NSA Scotland president John Cameron said:  “These pasture and cross cropping proposals may be alright for the arable areas but as far as the hills and uplands are concerned, these farmers are already achieving the objectives of the greening proposals.

“If many of these farmers have to carry out the proposals, then stock numbers are going to go decline. And it’s sheep that permanently keep people in these areas.”