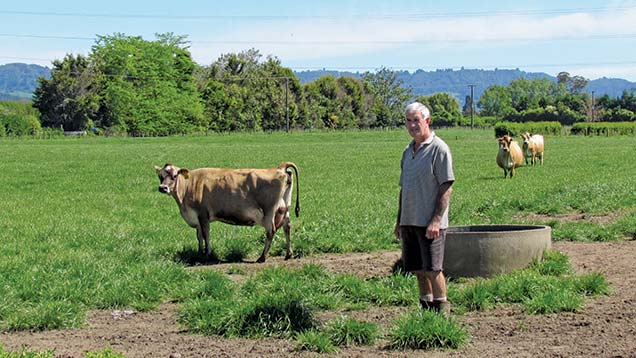 And with a stocking rate of 3.3 cows a hectare, they did not want to reduce cow numbers from 460. However, an analysis of the strengths and weaknesses of their business soon identified that, with 1,400-1,500mm rainfall annually, poaching was a big problem.

While he aims to keep pasture residuals at 1,500-1,600kg/ha DM, overgrazing was also causing problems. But with the addition of a feed pad and an on-off grazing system, he believes that 2-3t/ha of extra grass can be harvested.

“It’s nicer for the cows and the pasture isn’t harmed,” he says.

He looked at a range of different feed pad options, providing each cow with 8sq m of space on soft bedding and 700cm at the feed trough.

About 30t of barley is mixed with rapeseed meal and fed when grass is going to seed. During the calving and breeding period, cows are fed 1-2kg barley and 1-2kg palm kernel both bought on contract, depending on grass availability and quality.

It is up to 10C cooler in the shed, so on summer days over 24C, the usual routine of putting the cows out at first light and bringing them back at 4pm is varied to let them spend afternoons inside.

The flooring is made up of layers of drainage material, clean pumice, wood pulp and sawdust, with the top layer worked up every day to incorporate dung. It is cleaned out regularly with a scraper, heaped up to compost and spread on maize paddocks instead of using fertiliser in the spring.

“It will have a big impact on our fertiliser bill,” he says. “Four million New Zealanders are telling us how to farm so it’s best to be the dog at the front of the pack.”