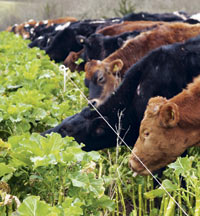 Wintering dry cows on green crops on rented off-lying land can substantially reduce costs for milk producers and be beneficial for arable growers, too.

One spring calving producer’s figures suggest wintering costs can be halved by renting arable land to outwinter in-calf heifers and dry cows. This means the arable grower can then generate an income from it during the fallow period and benefit from the addition of valuable nutrients to the soil from cow manure.

Somerset farmer, Chris Barnes is paying £70/acre to keep between 80 and 100 cows on 29 acres for 12 weeks from November. The price includes the cost of planting and growing a crop of turnips and some fencing, too.

“I haven’t quite worked out all the costs because I’m planning to make some big bale silage as additional feed, but I think it will be about half the cost of keeping the stock housed,” says Mr Barnes, who milks 255 cows at his farm in Wincanton.

This winter will be the first time he has outwintered his cows because the soil on his own farm is too heavy to carry stock in the winter. He had been waiting for an opportunity to rent land for this purpose.

The field had been planted with wholecrop and would have stood fallow after the crop was harvested in mid-July. And with only a short distance to the rented land, the only thing lacking is handling facilities, although he doesn’t see it as a problem.

“The hedges in the field and around the gateway are high so we will be able to make use of these for loading which should work well,” he says.

Although this should prove adequate, reasonable handling facilities are an important consideration when off-wintering according to Caroline Spencer, Volis Farm, Taunton.

She off-wintered 60 cows in 2004 and has learned from the experience. “What the field lacked was decent handling facilities which we really did need. For example when a cow slips her calf midwinter or a cow is too thin and needs to come home there needs to be somewhere to set up handling facilities,” she says.

Ms Spencer also rented land from an arable farmer. “We had an all-grass policy on the farm but wanted somewhere to grow a winter feed of stubble turnips,” she says.

Her advice to farmers considering a similar system is to make sure the field is the right one for this purpose. The field she rented was long and she grazed it from front to back. “We basically started at the wrong end. I would always recommend going from back to front because by January the field can be quite muddy,” she says.

Another drawback of renting arable land is it can lack boundary fencing. Ms Spencer didn’t want to risk using electric fencing because of the number of deer so she used stakes and barbed wire to enclose the field. Cost wasn’t really an issue because she removed and reused the fencing.

She also had to create drinking facilities. “We put in a water trough at the front end which the cows had free access too, but by the end of the season that alley had become quite churned up,” she says.

She rented the 25 acre field between September and February, intending to keep 100 cows on it. However, it was a poor growing season and the yield on the turnips was low so it was only suitable for 60 cows. She bought big bale straw from the host farmer to feed alongside the turnips.

She has since considered further off-wintering opportunities, but says it is getting more difficult to find land because there are fewer arable farmers growing spring crops.

But for those growers who do enter into similar agreements with dairy farmers, there are benefits beyond the rental income.

“The land we rented had a light, sandy soil so the manure from 60 cows was a valuable resource,” says Ms Spencer.

Another benefit of off-wintering is it protects the grass area on the home farm allowing the farmer to get the maximum from his own land, says Pasture to Profit dairy consultant Tom Phillips.

But it can be difficult when the crop of choice is fodder beet. “The yield from fodder beet tends to be better than turnips, but when it goes into the ground in April or May and doesn’t get used until November to January that’s a long time to tie up land. Turnips work well because they have a relatively short growing season,” he says.