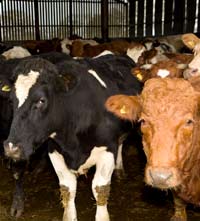 However the indexes also welcome the arrival of new blood (mainly sired by Goldwyn), some of which have not yet been confirmed as available in the UK.

Heading the currently marketed list of bulls is Oman son, Lynbrook Jancen. He transmits the smaller, rounder type, with high milk components, and excels in daughter longevity, with a Lifespan Index of +0.5. His PLI is £241.

He pushes the previous number one, Co-op Oman Logan, down to second place with his PLI of £241. This one is the best SCC improver in the top 10, transmitting a -22% reduction in cell counts compared to an average Holstein.

In sixth place is milk components specialist, Timmer Tyson, while high milk volume bull, Mainstream Manifold, ranks seventh with a PLI of £217. Tyson and Manifold are by far the best direct calving ease improvers in the top 10.

Making their way into the top 10 from just outside are Woudhoeve 1042 Impuls (ranked eighth), who descends from the popular Pietje family in the Netherlands and gains 22 PLI points this run and End-Road Oman Bronco (ranked tenth), who, with a daughter Fertility Index of +5.7, is the strongest transmitter in the top 10 for this important fitness trait.

Ranking equal eighth is Morningview Legend, who attracts extra attention because his nephew, Morningview Levi, is the highest new entrant, with a PLI of £209. Levi is a R-E-W Buckeye son, from the full sister to Legend, and transmits a very balanced proof across all traits.

The highest available Goldwyn son, ranked just behind Levi in twelfth position, is Ralma Gold Crown, who was released after the last proof run. With solid production and good performance across the fitness traits, he increases by 22 overall points this run, taking his PLI to £208.

Highest climber in the top 50 PLI bulls is UK-bred Cogent Twist, who is also the highest-ranking son of Shottle. Twist gains 29 PLI points, up to £195.

Several new bloodlines, dominated by Goldwyn sons, are making their appearance this run, and once AI companies have had time to digest the figures over the next few days, they will no doubt add these bulls to their spring catalogues, when they will also join the official DairyCo ranking.

Amongst them are: Danillo (PLI £214), out of ALH Destiny, who is sister to several proven sires out of the famous Markwell Durham Daisy; Pirolo Goldwyn Wyman (PLI £207), from a deep Italian cow family; Guarini (PLI £196), bred in Germany; Go-Farm Artes (PLI £192), from the popular Tina family at Jeffrey-Way in the US; and finally, Ballycairn Tiergan (PLI £191), bred in the McCollum family’s herd in Northern Ireland.

All five of these Goldwyn sons display solid production with excellent SCC, Lifespan, Fertility Indexes and conformation, although Wyman and Artes are yet to receive official UK figures for Fertility Index.

It’s pleasing to see such a wide variety of high health and fitness bulls amongst this new ranking, says Marco Winters, head of genetics with DaiyCo.

“I am often asked about the heritability and reliability of fitness traits and I think this proof run continues to provide reassurance that they remain stable over time, while their on-farm use is providing a growing body of evidence that they work in the field.

“With such a large gene pool of Holsteins available to UK breeders, there is lots of scope within this breed to improve the health, fitness and welfare of the British dairy herd.”