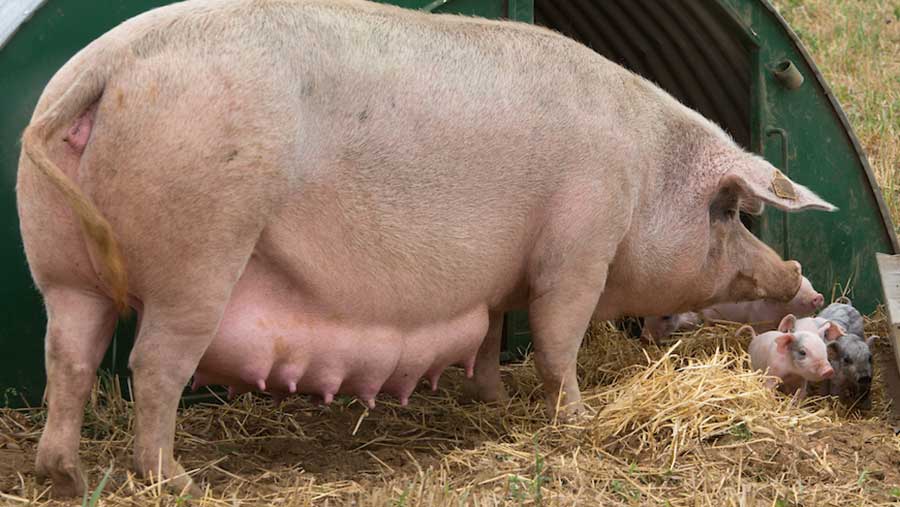 It stands on a 25m x 22m concrete pad on the site of the former indoor sow housing, which was put up in 1988 and had become outdated.

So far, the new system is exceeding performance expectations.

The original target for post-weaning mortality was set at 5%, but the current figure is just 0.3%.

The unit will hold a maximum of 30 sows on a fortnightly batch-farrowing basis, but the area is large enough to accommodate up to 200 females with further expansion also planned.

Of similar design to the old-fashioned pig sty, flat-roofed wooden arks bedded with straw are used for shelter.

Individual sows also have access to a 4m x 4m loafing pen, made from steel rails welded together by farm staff to keep costs down.

Clever use is made of farrowing crates, which now function as feeding stations and contain sows for treatment, or while piglets are being handled.

It had been hoped the original concrete floor could be used for the arks, but creating a new base has brought its own benefits. A fall of about 2.5 leads away from the loafing area to a central drainage passage, minimising the risk of cross-contamination.

This is a great improvement on the former indoor unit, where accommodation had to be cleaned out manually. Weaned piglets go on to straw-based indoor pens in an airy shed, instead of the slatted flooring that was previously used.

They remain in the same batches throughout their lives, a move which has greatly reduced stress and related problems.

The unit now has one full-time pigman, with occasional help, and it is anticipated that two full-time workers will be needed as sow numbers rise.

This compares favourably with the 240-sow intensive unit, which was staffed by a team of four.

Farm manager Paul Robinson says the new system has been cheaper to build than a conventional farrowing house, although he concedes it occupies a greater area.

He hopes the farrowing village will last for at least 15 years, giving the business the chance to pursue high-welfare contracts, while solving many of the unit’s former problems.

“There was no point considering a fully outdoor herd, because the land is too heavy, but I feel the indoor/outdoor method brings together the best of both worlds,” says Mr Robinson.

“It complies with the RSPCA’s Freedom Food standards, so when the first finished pigs leave the unit this autumn, we will be looking for a price premium.

We may also be able to meet the demand from outlets selling regionally-produced, welfare-friendly meat.”

Despite his optimism, Mr Robinson says there has been a high incidence of laid-on piglets, a hurdle he is hoping to at least partially overcome by increasing the quantity of straw available.

However, overall, he is very pleased with the changes that have been made.

“When we set out to review the business, we had a typical intensive breeder/finisher unit, with worn-out farrowing accommodation and poor performance.

The most important element was to break the cycle of stress that was exacerbating the problems we were having with wasting disease.

We also wanted to cut down on labour, and widen the scope for new and more profitable pigmeat contracts. “I feel this set-up has delivered all three objectives, and I don’t see why it wouldn’t work on a privately-owned farm.

However, I realise the combination of lower stocking rates, a brand new system and a fresh crop of gilts has given us the best possible start.

So the challenge will be to maintain performance and keep up the strict biosecurity regime,” he says.