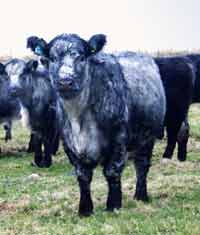 High wintering costs are making suckler cows uneconomic for many Scottish hill farms. So an Angus farmer has taken to outwintering cows on lowland arable ground to reduce inputs and avoid hauling feed into the hills.

The spring-calving cows live year-round at the Porter’s home farms, summering on permanent pasture. The autumn calvers, however, summer 90 miles to the west, high in Glen Lyon – Scotland’s longest glen – at Cashlie, a 3075ha (7600-acre) hill farm, which peaks twice at more than 3000ft, also owned by the Porters.

A flock of 1100 North Country Cheviots are permanent Cashlie residents and share their summer grazing with the 95 autumn-calving Blue Grey cows and heifers, which are restricted to the high ground, self-selecting their preferred grazing areas of natural herbage, including indigenous clover, which thrives up to 2000ft, says Mr Porter.

The Porter’s arable enterprises provide ample over-wintering feed and bedding, but the only feed hauled the 90 miles into Glen Lyon is some hay for the ewes – insurance against grazing running short.

Instead of hauling large quantities of straw and feed into Glen Lyon for the cows, they are taken back to the Porter’s coastal farms for calving and over-wintering.

“As soon as cows calve, groups of 32 to 35 are turned on to stubbles, under-sown with Italian Ryegrass. In early November each group starts strip-grazing a block of about 2.83ha (7 acres) of kale, strategically placed on sheltered light land, close to the sea, with access to dry lying areas,” says Mr Porter. “They also receive ad-lib straw – ideally, one big bale a day – plus 2kg of home-mix with minerals, until the bulls are taken out.”

Cows and calves remain outside until kale is finished in late February, when they are housed in the buildings vacated by the finished, previous year’s calf crop. The fields, benefiting from several months of self-spread manure, are ploughed and re-sown.

“The health of our cattle is a priority,” says Mr Porter. “The herd is vaccinated for BVD (bovine viral diarrhoea), a great investment. The only time we see any calf pneumonia is when we bring cows and calves inside.

“So once the cattle are under cover, we make sure calves can still get outside through narrowly-open gates, enticing them out with good silage, placed well away from the building. This keeps them acclimatised to being outside, avoiding a check at turnout.”

The calves are weaned on 1 May. The bull calves, which are kept entire, run outside, receiving 2kg of barley mix until housing on 1 September, when they go on to ad-lib silage and barley mix, to finish November/December.

Heifers summer naturally until introduced to barley mix in early September. They are housed in early October to finish on silage and barley from December to February. Target deadweight for bulls is 350kg at 12.5-14.5 months. Heifers are finished at about 280kg at 14-18 months.

Some people regard Blue Greys as old fashioned, hairy little cows, says Mr Porter. “They are in fact purpose-bred suckler cows, with hybrid vigour, extremely hardy, healthy and fertile, with milk capable of rearing and making the most of a quick-growing Continental-cross calf. They also have tight, non-pendulous udders with small, neat teats which a newborn calf can get in its mouth and suck.”

Blue Grey heifers are bought annually by Mr Porter, at the November sale at Newcastleton in the Scottish Borders. Bulls, both Limousin and Charolais, are bought either privately locally, or at Perth Bull Sales.

To Mr Porter a good bull is one which will get females in calf, with calves that will thrive, grow and quickly put on weight.

“I buy from pedigree herds I know and choose my Charolais bulls for size and scale, consulting the figures for a high liveweight gain. I also note the calving EBVs, but I’ve found that in reality there’s no difference.”

Bulls go into the cows on 1 December for 10 weeks. “Helped by the health and fertility of the cows, conception is reliably above 95%, with almost all calving within the first eight weeks.”

Once weaned, the autumn calvers return to their Glen Lyon summer quarters in early May, where, to avoid competing with ewes and lambs, they go straight to high grazing, above 1200ft.

Mr Porter’s autumn-calving suckler enterprise, with the Angus arable land benefitting from the muck, and the Glen Lyon sheep grazing enhanced by being grazed down by cattle, might at first glance seem a luxury, self-contained, “mixed farming” enterprise, spread over 90 miles. Certainly it would be extremely difficult to justify keeping cows year round in Glen Lyon.

However, the principle of keeping cattle on the two different farm types justifies a closer look, he believes. “If arable farmers with the facilities, feed and bedding, but no stock, could work with upland farmers with suckler herds who have to buy in all, or the bulk of their winter feed and bedding, it could be beneficial for all concerned,” says Mr Porter.

For hill farmers there are few realistic options other than stock, he says. “Scotland’s cattle farmers have long benefited from a premium for their Scotch beef, thanks to the reputation and image of suckler beef produced in naturally beautiful places like Glen Lyon. Yet, sadly, the QMS figures show that without production-linked subsidies, upland herds struggle to be economic.”

If ways cannot be found to keep cattle in the hills, the foundation of one of Scotland’s flagship products will be eroded, with negative knock-on effects for employment in the many associated businesses which rely on a thriving beef industry, he adds.