Detection of parasites has been incredibly valuable for farmers involved in the Zoetis Parasite Watch scheme this year.

Many producers say they have been surprised by when the parasite challenge occurred and have also saved money as a result of only drenching when necessary.

Gareth Jones, who farms at Cilerwisg, Ceredigion, says that in a faecal egg count test taken at the end of August he was shocked to see no worms in the group of lambs tested.

“Normally we would blanket treat lambs at weaning, but we didn’t have to. It shows we were using too much wormer before and as a result have saved money. There’s no point taking a paracetamol if you haven’t got a headache,” he says. 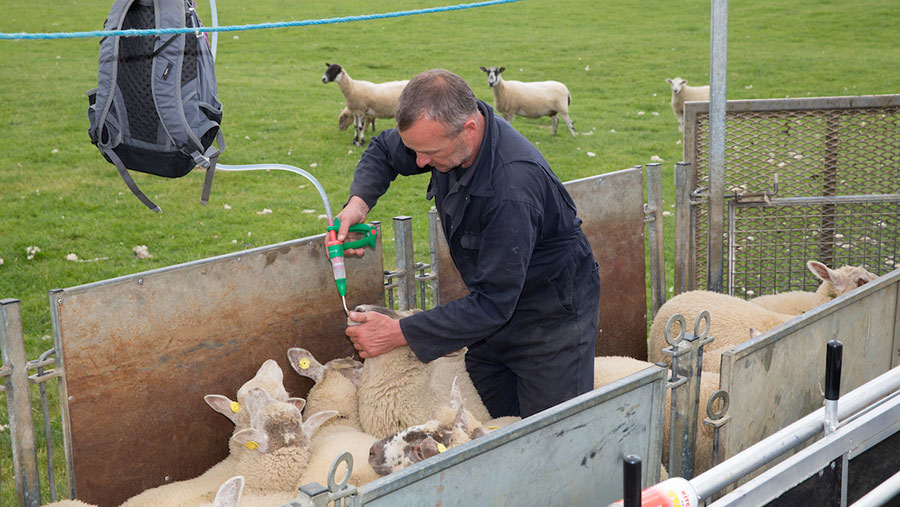 Tom Carlisle also says he hasn’t had to dose lambs in the back-end of the season due to low worm egg count results.

“This means we’ve not been dosing unnecessarily and have been dosing correctly. It’s also good to know the wormers we have been using have been working effectively and we don’t have any resistance.”

Early in the season, Mr Carlisle said he “had his eyes opened” when worm egg counts came back high. “It allowed us to get on top of it before any major problems,” he says.

Welsh farmer Owen Burns says that even though taking faecal samples for testing is an extra job, it is one that is worth doing.

“The results quite often back up your suspicions and reassures you that you are dosing for the right thing and at the right time,” he says.

Scottish farmer Roy Weir says basing worming decisions on fact is something he has been doing for the past few years and will continue to do.

“Although it’s been a quiet year for worms for us – we didn’t have much of a problem with nematodirus – from a management point of view it means you can treat sheep at the right time and only when needed,” he adds.

See also: A guide to effective wormer use to reduce the resistance risk

For Steve Thompson not only has monitoring faecal egg counts helped him save money on treatments, but it also identified fluke earlier than expected.

He normally treats according to a schedule. He says: “I didn’t think fluke was a problem this early, with stock usually treated nearer to tupping time. Testing has opened my eyes to the problem. We now see fluke as an earlier problem and the tests have highlighted the issue before we lost any animals.”

Being involved in the Parasite Watch scheme has been “fantastically useful” for Claire Wise because it has allowed her to identify the beginning of a resistance problem.

Ms Wise runs a flock of 500 ewes and would be classed as being in the top 5-10% for farm health management.

She says: “We always thought we were on it when it came to worming. We would normally use the online SCOPS tool to see when challenges were happening early in the season and would then have followed a monthly worming routine throughout the summer.

“However, by monitoring worm burdens, we have been able to be more strategic and have actually saved money by only worming when necessary.”

She says monitoring faecal egg counts also allowed her to detect nematodirus one month earlier than she would have expected. “If we wouldn’t have detected this, then we would have faced major production losses,” she adds.

Being involved in the scheme has focused John Hoskin’s attention on taking regular faecal egg samples.

He says: “You can’t afford to worm sheep every month irrespective of what is happening. Regular faecal egg counts have benefited the farm.”

Tests on his farm this year and previously have revealed some resistance problems that have reinforced the importance of taking egg counts.

He adds: “Taking faecal egg counts allows us to keep on top of things. We are trying to use wormers sensibly and take preventative action.”

His vet, Emily Gascoigne, emphasises the importance of farmers knowing whether wormers are working on their farm. She says: “As a minimum, farmers drenching sheep should be following up with a post drench check test to see whether the product has worked. If you go to the petrol station and put diesel in your tank you always check it is full afterwards  – in the same way you need to check the worms have been removed.”

Monitor fluke and worm levels in your area

Farmers can monitor fluke and worm levels in their area by clicking on an interactive map found at www.parasitewatch.co.uk.

Parasite data from farms involved in the Zoetis Parasite Watch scheme will be updated regularly. This will allow farmers to see if there are spikes in certain parasites throughout the year in their area and enable them to take action.

To use the map, click on a farm in your area and view the details of any parasites that have been found, as well as when they were detected will be displayed.