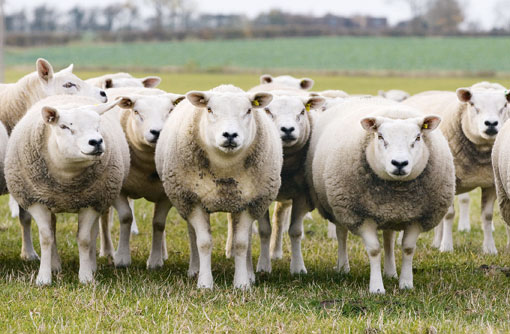 Matching ewe lamb feed intakes to their daily liveweight gains is crucial between tupping and lambing if they are to achieve their adult bodyweight potential.

Hefin Llwyd, who runs a flock of 900 sheep in Devon, grazes his ewe lambs on the best available grass after tupping.

“Ewe lambs need good nutrition because they are growing animals. We give them the best quality grazing and send them away on to winter keep if the grass quality at home isn’t as good as it should be during that period,” he says.

Mr Llwyd targets a dry matter intake equivalent to 3% of their bodyweight. If there is a shortfall, he supplements with feed blocks but no concentrates are fed.

The flock at Taw Barton Farm, Okehampton, is predominately Lleyn, with the ewes lambing in late March and the ewe lambs two weeks later. Lambs at foot are weighed at least every month. “It is a crucial growing period,” says Mr Llwyd. “I can monitor growth rates and manage grassland and worming strategies better when I know how much my lambs are gaining.”

Lambs are weaned at about 14 weeks, at 34-36kg. From there, they are on a good plane of nutrition with the aim of gaining a minimum of 10kg by 7 November, when they are put to the ram. Post-weaning, the daily weight gain target is 120-150g.

Mr Llwyd weighs and monitors their performance between weaning and tupping when they have preferential grazing on clover and high sugar grass leys. “They need to be heavy enough going to the ram. A target weight of 45kg is essential and we find a weight gain of 120-150g a day is adequate,” he says.

While Mr Llwyd seeks to maximise the body condition of the ewe lambs, he also controls grazing to reduce the prevalence of twins. “It is hard enough for a growing animal to rear one lamb so I will not flush the ewe lambs at tupping time to reduce twining. It is to the detriment of the ewe and the lamb if she has twins because neither will achieve their full potential.”

A combination of abundant and high-quality grass last season resulted in a ewe lamb scanning percentage of 147%; target scanning percentage is 110%. “I like to have a few twins because if a ewe loses her own lamb there are additional lambs to foster,” Mr Llwyd explains.

“This year it will be nearer 65kg,” he predicts. “As a consequence, the lambs produced in her future breeding will be slightly lighter.”

In the six weeks prior to lambing, nutrition is carefully monitored to reduce the possibility of large birth weights. They graze on poorer quality pastures or are housed and fed silage with a very small amount of concentrate in the last three weeks if silage quality is poor.

The ewe lambs are turned out to lamb about two weeks before lambing. Post-lambing, they graze the best swards to maximise both lamb and ewe lamb growth rates.

During early and mid-pregnancy, ewe lambs need 20% more feed than mature ewes if they are to sustain body growth.

ADAS sheep consultant Kate Phillips says feeding should be sufficient for maintaining ewe lamb growth and to sustain their pregnancy.

If grass is in short supply, many ewe lambs will need supplementation of up to 0.5kg, but they must not lay down too much fat as this will hamper conception and subsequent milk production.

“It is important not to stimulate ovulation too much as you really don’t want twins from ewe lambs,” says Ms Phillips.

According to EBLEX, ewe lambs should be at optimum body condition score three, six weeks before lambing. Most foetal growth occurs at this time and feeding too much can lead to oversized lambs and difficult births. EBLEX recommends feeding only for maintenance and the growth of the lamb in utero during this period.

Lactating ewe lambs require 20% more feed than mature ewes. Their lambs should be creep fed and weaned at nine to 14 weeks.