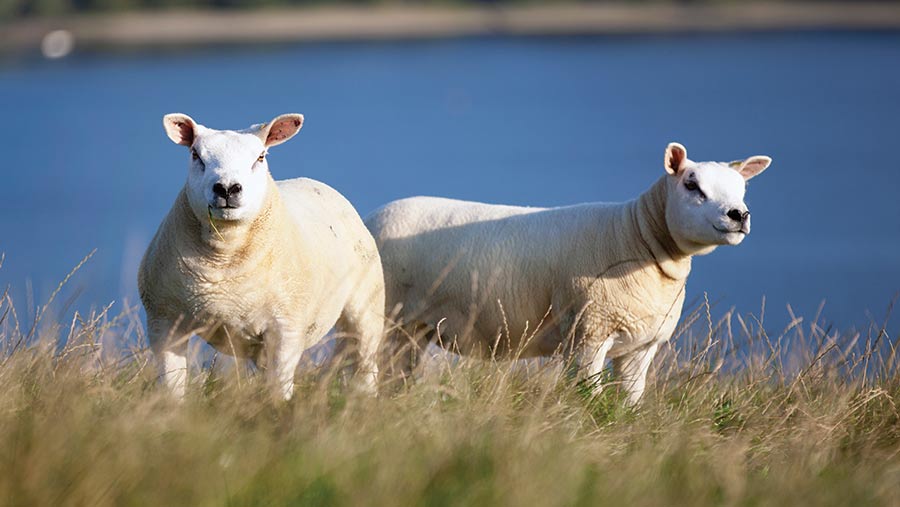 The newly established Usk Vale pedigree Texel flock is speeding up genetic gain by using a combination of embryo transfer (ET) and AI.

Nick Davis and his son Will set up the Monmouthshire-based flock one year ago as a diversification to their Christmas turkey business, but they are quickly expanding the flock through the use of ET.

The family previously ran a commercial flock of 500 Welsh Mules alongside their Usk Vale Poultry business, but falling margins forced them to reconsider their options.

“The farm was never really big enough to justify more ewes and we didn’t have the time because of the poultry business.

“We had two options; to get out of sheep altogether or to diversify slightly. We had always used Texels as our terminal sire and it was an interest of mine that I wanted to pursue,” says Will.

He believes investing in only the best bloodlines, alongside the use of ET, is helping them to achieve rapid genetic gain.

“The aim from the start was to buy into top pedigree families with proven bloodlines. In my view you can’t make money out of Texels without doing this,” adds Will.

She was bought in a private deal for £15,000 and is already starting to make waves in the flock, having bred their highest-grossing ram lamb, Usk Vale War-Lord, by the 42,000gns Glenside Valhalla, which sold for 5,000gns at the English National sale in Worcester earlier this year.

Will says when the opportunity arose to purchase the entire flock of embryo recipients from the 2014 Cairness flush in early January, along with a number of donor ewes, “it was too good an opportunity to miss”.

Nick Davis (right) and his son Will

He places a particular emphasis on sourcing foundations with plenty of breed character and excellent conformation. “We never purchase a ram on EBVs alone. I would only use it as a tool, an animal has to look the part as well.”

Increasing importance is placed on mobility too.

“Legs are important within the breed at the moment. We are looking for all the Texel characteristics, but we are also looking for something extra – a sheep that’s going to stand out and breed for the pedigree market.

Another market the Davis family is tapping into is the demand for maedi visna (MV) accredited recipients.

They also run a flock of 300 Mules, which are being put to a Suffolk ram and due to lamb with their first crop in late March. The aim is to sell these for a premium as ewe lambs or yearlings. Will says he chose the Suffolk Mule because it is “big, easy lambing, with good mothering ability.”

“The Suffolk-cross is ideal. It has got a wide pelvis and lot of milk,” he adds.

He says they complement the pedigree business because they’re able to produce enough recipient replacements for their own use to accelerate genetics through the use of ET.

The pedigree flock has grown to six ewes and 30 ewe lambs, but just 12 (the ewes and six of the best ewe lambs) are chosen for embryo work. The remaining ewe lambs will be run on as yearlings.

The first flush is taken in late September before a second lot of eggs are harvested in October.

“ The aim is to have a batch of recipients lambing in the middle of February and March. Embryos from a winter flush [January/February] are frozen as a back up in case ewes don’t flush as well as is hoped for hope for.”

Pedigree ewes are synchronised using progesterone sponges. After seven days the sponges are changed and three days later ewes are injected with pregnant mare serum gonadotrophin (PMSG) along with other ovulation drugs, which stimulates oestrus and early ovulation for a number of days.

Sponges are removed on day 12 and teasers are introduced straight away. “You then know when they are coming on to heat and can adjust the AI times accordingly,” says Will.

The following day pedigree ewes are AI’d laproscopically. Sponges are then reinserted into the donor ewes to prevent embryo regression before they undergo ET work to remove the embryos six days later.

During ET, ewes are sedated, a small incision is made and saline solution is used to flush embryos out of the reproductive organs.

They are placed into a petri dish and graded under a microscope before they are then labscropically placed into recipients.

“You hope for up to 80% hold for fresh embryos but you only get 50% from frozen. The aim is to get seven to eight embryos from a ewe flush and you would hope to have four to five from a ewe lamb.”

Will says good nutritional status in the run-up to breeding is key to achieving this.

Ewes are thinned down to a condition score of between two and three before ET work begins. At sponge insertion, ewes are turned onto good clover grass leys and are given a low protein, high sugar diet of beet and oats alongside omega-3 high-energy blocks to steadily increase their nutrition levels in the build up to AI day.

The farm is low in cobalt and copper so ewes are blood tested six weeks prior to embryo work begins and if necessary they are given a drench to address any imbalances.

“Stress is kept to a minimum after embryo work to ensure they hold. They stay in the same group pre- and post-AI and you wouldn’t gather them with dogs.”

The family hopes to have 80 pedigree lambs born next spring.

Everything is brought indoors six weeks prior to lambing. The recipients are lambed first in February followed by the second batch in mid-March.

Single carrying recipients receive 150g/day of a 19% protein ration two weeks before lambing and the commercial flock of Mules are then lambed late March/early April.

Post-lambing pedigree Texel offspring are run in and out of the shed and are creep fed until weaning when they moved on to a forage crop and trough fed for sale.

As they continue to build flock numbers the Davis family hope to sell ram lambs at national and club sales.

Meanwhile, the recipients will be sold privately off the farm.

“A lot of people want high health status sheep for recipients. It is the first year we will be lambing them but we anticipate this side of the business will grow. The idea was to add value to the commercial flock because everything is MV-accredited.”