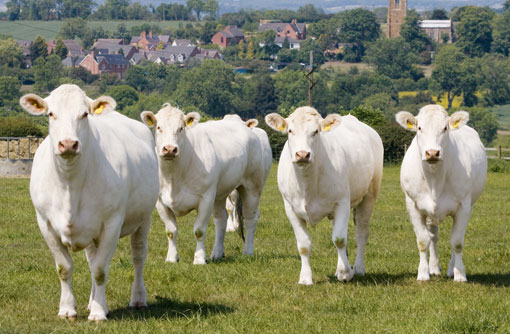 Northumberland pedigree beef breeder Jonathan Watson of Bowsden Moor believes the rate of progress achieved in terms of performance and trait selection over the past 25 years has been phenomenal.

His herds of pedigree Limousin, British Blue and most recently Charolais are all BLUP (Best Linear Unbiased Prediction) recorded and have figures that demonstrate the increase in weight gain now achievable across the main terminal sire breeds, compared with the figures that would once have been considered satisfactory.

The Tweeddale herd’s senior Limousin stock bull Newhouse Cyclone – bought at Carlisle for 14,000gns – has been a trailblazer at Bowsden Moor in proving not only the extent of the potential for high weight gain, but also the degree of heritability for those genetics to be passed on.

Cyclone, by Vivaldi, has a beef value of +52 and is in the breed’s top 1% on his BLUP ranking.

“Cyclone had a massive weight gain on his EBV figures of almost 2kg a day from birth. We’ve just sold his May 2011 calves at the Limousin Society’s October sale and we had one son weighing 970kg. When we bought Cyclone he was just over 400 days and weighed 950kg,” says Mr Watson.

Five years ago, the Watsons switched from running a 300-strong commercial suckler herd to breeding solely pedigree cattle. There are now 80 Limousin cows at the family’s farm, near Berwick-on-Tweed, which also produces about 40 pedigree British Blue calves a year. A new Charolais herd has also recently been established.

The herd weighs its calves four times a year starting in January, again in March/April, again mid-summer and then at housing in October. All cattle are scanned twice a year.

“We’ve only been scanning for a few years, but we’re seeing figures for eye muscle development in sons of Cyclone that prove how these traits are being passed on and just how far the pedigree cattle industry has come as a result of recording and BLUP analysis.

Eye muscle and weight gain are the two traits he believes are most critical to his current breeding policy.

“The rate of improvement over the years beef cattle have been recorded for performance traits continues to accelerate. Even 10 years ago, a cross-bred calf doing 1.5kg would have been performing well, but using today’s top genetics can put almost another 0.5kg a day on to that.

“We want our first 100-day weights to be as close to 200kg as possible and our 300-day weight needs to be well above 500kg. But the rate of improvement breeders have seen over the years is now producing the best Limousin bulls capable of achieving almost 800kg by 400 days. It’s not that long ago that they would have been satisfied with 600kg at 400 days.”

He says the EBV for calving ease has been a priority when selecting the herd’s new Charolais stock bull.

It has, at times, been a rocky road and some may say we still have some way to go, but using superior genetics based on optimum levels of performance and the selection of favoured traits has brought about a massive change to UK beef production in the past 25 years.

Although driven by breed societies, the recording of an increasing range of trait data has not only benefited pedigree breeders. As was intended, the benefits have filtered down into commercial beef production and provided suckled calf breeders and primestock finishers with cattle that perform more efficiently.

By basing the assessment of an animal on what you can’t see, when the essence of good stockmanship had been nurtured for generations on the value of visual appraisal alone, selection has taken a leap of faith for many commercial buyers of pedigree bulls needed for crossing.

Sam Boon, EBLEX breeding specialist, says the big breakthrough over the past 25 years was the move from comparisons within small groups of cattle on-farm to across-herd comparisons, because of the use of BLUP and the development of more sophisticated computer technology.

But as BLUP analyses have now become an essential breeding tool, the future is bound to see even more traits evaluated, such as those for docility and scrotal circumference that have been introduced this year.

“Over the past 25 years, the most significant improvement has been in growth rate. We have identified animals with superior growth rates and enabled commercial producers to tap into those genetics and reduce the time it takes to finish prime cattle,” says Mr Boon.

But he says the biggest challenge for the future will be to make sure the ongoing increases in growth rate are not at the expense of ease of calving.

“We know there is an antagonism between growth rate and ease of calving and breeders select on growth and carcass traits; however, they tend to give the benefit of the doubt to some bulls where calving isn’t as good as it could be.

“And there is a downward trend in the ease of calving in some breeds, although the Charolais breed is an exception to that, having positively addressed the issue.

“Ease of calving has to come hand in hand with selection for terminal site traits. But looking to the future, we are going to see more commercial beef producers breeding their own suckler replacements and so can expect more focus of attention on a bull’s maternal traits when it may be used to produce females.”

“Ten years ago, a breeder would have been prepared to buy a bull that he liked even though its figures may have been below the breed average,” he says.

“Today that’s not happening. A breeder will not tolerate any loss of performance, but there have also been changes in the bulls that are offered for sale.

“Very few bulls that are below average are even offered at sales and are hopefully not even finding their way into the breeding population.”