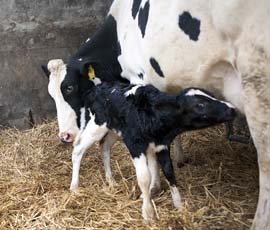 In a statement, Pfizer Animal Health ruminants business director, Paul Fitzpatrick, said the company acknowledged a link between the vaccine – which was withdrawn from the EU in July 2010 – and BNP.

However, Mr Fitzpatrick also highlighted a link between BNP and consumption of colostrum, recommending that farmers avoid the use of pooled colostrum – particularly that of cows which have previously produced BNP calves – and to ensure they collected and stored colostrum from healthy cows.

Mr Fitzpatrick added that the company was committed to working with researchers and regulatory agencies, and urged farmers to report any cases of BNP where PregSure BVD had been used.

SAC head of vet services, Brian Hosie, responded: “Farmers should not be deterred from using vaccination to assist their control of BVD, and they should discuss appropriate use of BVD vaccines and the control of BVD with their own vet.”