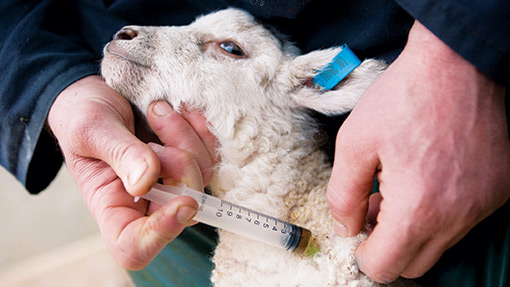 Phage therapy is gaining global attention as a possible alternative to antibiotics in human medicine. But could it be used in animals? Dr John Rae explains how it could work.

Antibiotics resistance is a growing problem in farming, with many common animal infections becoming more difficult to treat.

These infections are becoming resistant to first-line and increasingly second-line and third-line antibiotics, resulting in more costly and longer treatments and higher mortality rates in farm animals.

To keep one step ahead of anti-microbial resistance (AMR), the pharmaceutical world needs to develop new antibiotics. But this has slowed to a trickle in recent decades, making careful use of existing antibiotics by farmers and vets imperative to slow the progress of AMR.

The growing problem of AMR has also made the search for alternative treatments more vital to maintain modern production efficiencies in agriculture. Phage therapy is something being looked at as a possibility.

The word phage is short for bacteriophage. These are tiny viruses that kill only bacteria.

Eventually the bacterial cell bursts, releasing large quantities of the virus, which go on the attack again. In effect, a self-perpetuating treatment.

Where antibiotics can act like a nuclear bomb wiping out all bacteria, phages are so specific that they only infect individual strains of bacteria. This makes phage treatments a silver bullet in targeting problem bacteria such as MRSA.

This isn’t just science fiction as phage treatments are already available for crop, animal and food use in the USA and Korea, and are likely to hit the UK market within the next few years.

Intralytix, a US company, has acquired Food and Drug Administration approval for food processing treatments for both environmental decontamination and direct application on foods such as cheeses and deli meats targeting listeria and salmonella.

Other products on the way include pre-harvest treatments against salmonella and Clostridium perfringens in poultry. These await FDA approval, but encouragingly, increased feed conversion rates have been reported by the company.

Lysogenic phages have the potential to make bacteria more infectious, and need to be avoided when making phage treatments. However, modern selection and purification techniques are capable of selecting efficient bacteria killers.

Other problems include bacterial resistance. Some bacteria in a population will have natural resistance to a phage. Solutions to this include the use of cocktails containing multiple phage strains, which research has shown to be more effective than the use of single-strain phage treatments.

Most current applications of phage therapy are in the area of surface treatments, such as factory surface decontamination, food, hide or carcass sprays.

There is little in the way of systemic remedies available, mainly due to the lengthy approval processes for veterinary applications of phage therapy. This is in part due to concern at the use of a self-replicating medicine capable of evolving, but also due to the complex approval process when dealing with a cocktail of active agents.