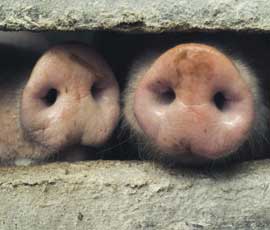 A Norfolk pig farm at the centre of animal cruelty allegations has been suspended from the RSPCA’s Freedom Food scheme.

The Little Thorns weaner unit near Swaffham was one of two farms targeted by animal rights activists from the pressure group Animal Equality.

Serious concerns about the footage were raised by the RSPCA. It sought an urgent meeting with the East Anglian Pig Company, which runs the farms.

An RSPCA spokesman said: “Further enquires have revealed that some of the footage is thought to include pigs under the RSPCA’s Freedom Food scheme.

“In the light of this development, Freedom Food has immediately suspended the Little Thorns unit from the scheme while investigations continue.”

“The footage that was given to us on Friday (21 April) largely contained images from Didlington – a farm not approved by Freedom Food.

“However, on further investigation of the footage, we became aware of totally unacceptable welfare practices on Little Thorns Farm – which is Freedom Food approved.”

The farm had now been suspended from the scheme.

“From time to time, individual members can let us down – but these are very rare cases. We will always take swift action when such breaches are brought to our attention.”

“We must stress that this footage was taken in January and has only now been made available to us via the media, despite being taken more than four months ago by Animal Equality,” he said.

“This greatly concerns Freedom Food and the RSPCA.”

Anyone with information relating to breaches of animal welfare should inform the RSCPA immediately, otherwise they could be allowing continued suffering, said the spokesman.