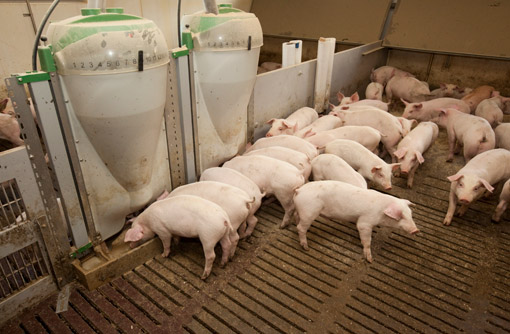 Pioneering technology is being introduced into the UK to help producers improve the flavour and quality of the pigs they produce without adding back fat.

Genetics company JSR is using scanning software to analyse intramuscular fat levels of live animals, so it can breed pigs that are tastier and more appealing to consumers.

It hopes the technology will help increase intramuscular fat levels from a UK average of 1% to 3% to create more succulent and tender pigmeat which producers can demand a premium for.

Developed by scientists at Iowa University in the US, the BioSoft Toolbox II software analyses the texture of loin muscle in living boars and gilts using ultrasound.

The scans allow breeders to actively select animals for higher IMF without excess back fat much more quickly than waiting until slaughter to score animals.

Caroline Mitchell, leader of JSR’s Food Quality Centre, said consumer taste tests had shown IMF levels needed to be more than double the current UK average to create meat that was most appealing to consumers.

“There are many pigs in the UK with an IMF level of 1%, but it is above 2% that consumers start to appreciate the difference,” she said.

“Ideally a value of 5% gives the fuller flavour and succulence that really appeals.”

Stephen Wait, JSR head of science, said developments were under way to see how the technology could be used further by being integrated into the slaughterhouse line to add value to pigs.

“By quickly identifying specific levels of loin marbling in carcases, we can identify carcasses which can go into high meat quality lines.

“Being able to do this gives us ammunition to go to processors and tell them we want to be paid on quality. If you have good pork, people will try it again – everyone’s winning from having higher-quality pigs.”

Mr Wait said the scanner was one of a number of ways technology was being used by JSR to progress breeding.

“We are also using feed intake recording equipment to collect data to further genetic improvement and test products for efficiency in real-life, commercial situations,” he added.

“The UK will have to start paying for quality of meat at some point,” Mr Wait said. “It may be 10 years away, but when quality becomes a consideration in price, our research will allow us to be there already.”

The company has also developed a new sireline which claims to cut finishing rates by up to three days and slash feed costs.

The JSR Geneconverter 800m boar creates highly feed-efficient progeny that have a high growth rate – offering an extra 5kg for producers looking for more weight at the end of their production cycles.

Grant Walling, JSR managing director, said by looking at the often-neglected early growth stages, the company had been able to select animals that offered quicker returns but also improved productivity by gaining more kilos in a set time.

“We have customers who are limited in finishing space or want to push finishing contracts and have an option for heavier weights. The Geneconverter 800 can help make that production cost-effective.”

The latest sireline follows JSR’s Geneconverter 700, which claims to be the most feed-efficient pig in the world.

“Up to 70% of the cost of production in pork is in feed, so it’s crucial that pig producers are as efficient as possible in that area,” said Tim Rymer, JSR chairman.