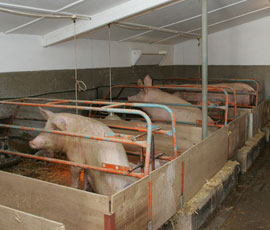 British pig producers face a £28m bill from a European directive requiring them to reduce the gaps in slatted floors by a single millimetre.

Rules due to come into force next year require that the concrete slatted floors for rearing pigs should have a maximum gap of 18mm.The European Commission believes wider gaps could see pigs getting their legs caught.

But many older British pig floors were built to imperial measurements with ¾ inch gaps – equivalent to 19-20mm. About one third of the 9.5m pigs reared annual in Britain are believed to be housed on concrete floors.

The National Pig Association said provisional estimates suggested replacing and disposing of these older slatted floors would cost about £28m. The association is conducting a survey of its members to ascertain more accurately how many farms would be affected.

“We are working with DEFRA and  [farm minister] Jim Paice to get a handle on the situation,” said NPA regions manager Lizzie Press.

“The majority of UK concrete slatted finisher accommodation is rather old and based on the old imperial measurement.”

It is not the first controversy surrounding the animal welfare directive.Only 12 out of 27 EU countries are on course to meet the directive’s 2013 ban on keeping sows in stalls after the first four weeks of gestation.

Sow stalls and tethers have been banned in the UK since 1999, prompting calls for legal action against countries that fail to meet the 2013 deadline.

“What we don’t want to do is lose the focus on the fact that the main target of the directive is the partial sow stall ban,” said Ms Press.

A DEFRA spokeswoman said the department was aware of the situation regarding concrete floors but it was too early to make any comment.