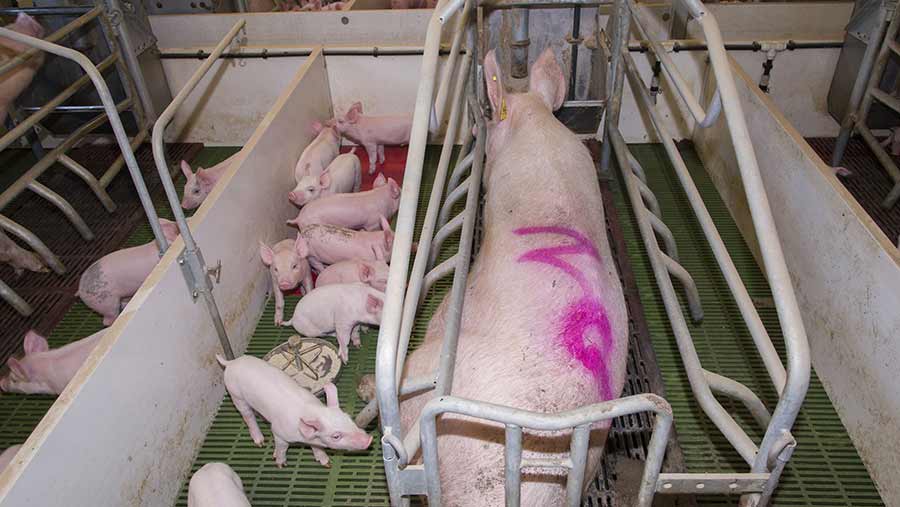 The pig industry should push on with efforts to replace traditional farrowing crates with free-farrowing systems, according to a report by the government’s farm animal welfare advisers.

The Farm Animal Welfare Committee (FAWC) has produced an “opinion” report that points out Norway, Sweden and Switzerland have already banned farrowing crates and free-farrowing systems are being developed in other European countries, particularly Denmark and the Netherlands.

The FAWC report said the 250,000 or more sows currently kept indoors in the UK were subject to close confinement, typically for up to a week before farrowing through until the piglets were weaned at 26-28 days. This prevented sows from nest-building, which was an important behavioural trait.

After looking at the evidence and talking to farmers who were trialling different systems, the FAWC said it favoured movement in the pig industry towards “well designed and operated” free-farrowing systems.

“Universal use of such systems should be the aim, but their commercial development is not yet sufficiently advanced to recommend compulsory replacement of farrowing crates,” it said.

“Adoption of free-farrowing systems should be reviewed in five years, and compared to that in other countries. If judged necessary for full adoption, the possibility of legislation to phase out farrowing crates should then be considered. For commercial reasons this may require action at EU level.”

National Pig Association chief executive Zoe Davies said the report could prove a useful roadmap for pig farmers as they strive to improve the welfare credentials of the industry.

Ms Davies said she was pleased the committee stressed the commercial development of free-farrowing systems was not yet advanced enough to recommend the compulsory replacement of farrowing crates.

It was also recognised that retailers and consumers would have to demonstrate their willingness to pay a premium for pork sourced from early adopters of free-farrowing systems.

“We are also pleased it warns against any future unilateral legislation in Britain. If and when we reach the stage where free-farrowing systems are proven to perform as well as farrowing crates, then any legislation must be at European Union level, and there must be a phase-in period that is agreed with the European pig industry.”

East Yorkshire producer David Morgan, a former Farmers Weekly Pig Farmer of the Year who operates a freedom farrowing system, agreed that introducing unilateral legislation would be a disaster.

But he stressed that the report was well-researched in that it recognised there was still work to be done in developing free-farrowing systems that delivered on all fronts.

“We are not yet at the stage when it commercially stacks up. But with more development we can get to that point. Animal welfare is something we have to keep working at and improving. I think it could be a good thing if we could move away from the farrowing crate.”