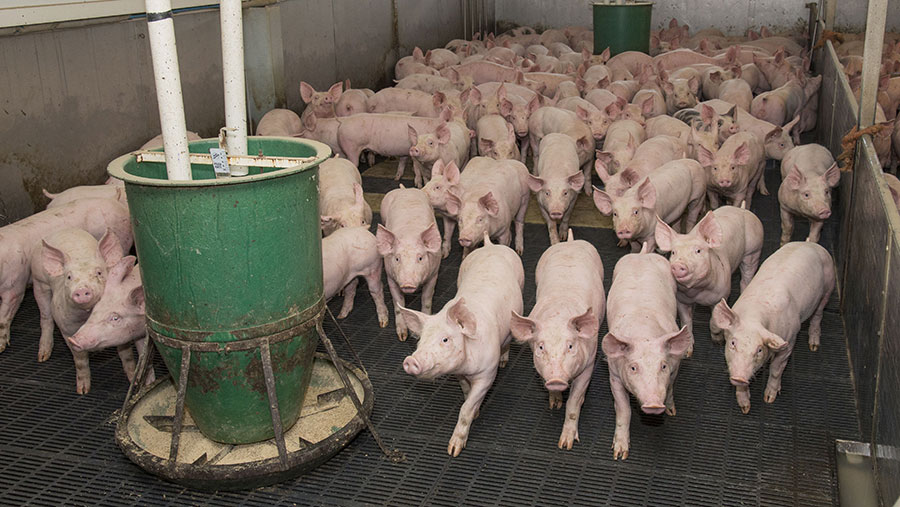 Aggression in commercial pig units appears to be increasing and genetics could be playing a part.

A great deal of pig aggression research has been undertaken over the past 40 years but the issue of pigs fighting has not improved, according to Simon Turner, animal welfare researcher at Scotland’s Rural College.

“There could be a situation where we are accidentally breeding pigs that are more aggressive in stable groups, which is probably due to dominance and aggression for feed.”

He points to four main issues when it came to reducing aggression, from simple strategies altering the environment and group interaction of young pigs to nutritional and breeding considerations.

Above all, he stresses mixing pigs, an unavoidable event in many productions systems, is a catalyst for aggression.

Unfamiliarity (increased when mixing groups) is a main driver for dominant pigs to show authority, whether in weaners, growers, fatteners or sows.

Pigs are most likely to become aggressive when mixed and faced with unfamiliar pigs, which leads to aggression as dominance hierarchies have to be expressed and established.

Some producers have formed large social groups at weaning and split them as growers and finishers, meaning mixing has been avoided.

Some producers have had success at providing extra space at the feed trough and larger pens to reduce competition for feed and more space for a defeated pig to retreat into and display submission behaviour.

Providing boards and breaking up open pens with barriers also provides retreating pigs with a means of hiding.

Both tryptophan and magnesium have been shown to have effects on reducing aggression.

Two studies with differing results found magnesium can have little impact on mixing aggression but has a greater effect on the frequency of aggression and lesions from a 0.05% or 0.5% inclusion of a mineral-rich marine extract.

Feeing tryptophan at twice or four times the required level for growth has halved fight duration (but not fight frequency).

Studies have also found tryptophan at 2.2 times the normal feed level reduced attacks in pigs and at 2.5 the normal levels reduced the frequency of attacks and skin lesions in sows.

Tryptophan is a precursor of the neurotransmitter serotonin, which is known to affect aggression suppression. Results show it may need to be eaten four to five days prior to being mixed. To have an enhanced effect.

Wild boar piglets socially interact between litters from a week of age when they are allowed to investigate other unfamiliar piglets from outside the litter and play fight.

This early life socialisation improves social skills and has been shown to reduce aggression in pigs at later mixing events when commercial units have removed partitions in farrowing pens at two weeks of age.

Genetic tendencies to bully or be bullied are about 40-45% heritable, which is the same heritability for reproductive traits. However, no single genome has been responsible solely for this behaviour.

Almost half the variation in same-breed pens of pigs is due to genetics. Some of this is as a result of selecting for lean meat yield and average daily gain, which correlates with aggression.

Four things you may not know about pig behaviour