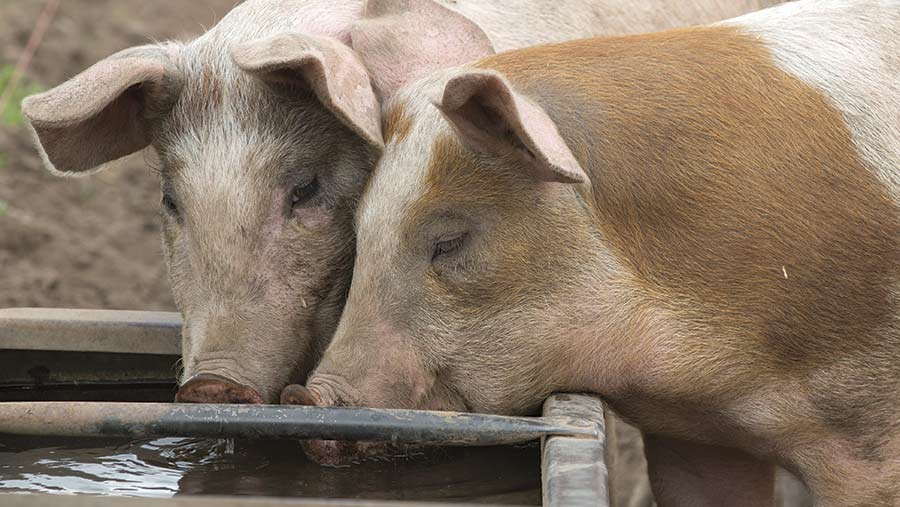 Infertility is a major reason for the relatively high cost of production on British pig farms and must be addressed if the industry is to be competitive with the rest of Europe.

The two EU countries with the lowest production costs are Spain and Denmark at £1.06/kg.

Although indoor sow performance is equal to the EU average of 2.29 litters a sow a year, for outdoor herds it is 2.22, AHDB Pork figures show.

And pre-weaning mortality for indoor sows is lower than the EU average of 13.3%, with the number of pigs born alive a litter the main reason for this.

Renowned pig vet Bob Stevenson discusses six major causes of infertility in pigs and how they can be avoided.

Producers who fail to record the first and second cycle of oestrus activity risk missing any third cycle, when young females are at their most productive.

Mr Stevenson advises farmers to start looking for the first signs of heat when maiden gilts are in the presence of other pigs.

“Observe specifically at 18-24 days thereafter for the second heat and the same interval for the third heat, when she is ready to be served.”

However, he cautions against introducing the boar or inseminating before the female is in correctly identified standing oestrus.

“Don’t mate in the early stages of that third cycle – wait until she stands rigid and doesn’t move forward when weight is borne down on her back, usually in the second day of the cycle.”

For sows, the aim should be to serve four to six days after weaning, when fertility is at its peak.

Sows will occasionally come on heat before three days, but service at this time leads to suboptimal results.

The service period should be regimented, with two or three services 12 hours apart.

2. Mycotoxin contamination in feed and bedding

Mycotoxins caused by moulds and fungi are present in grain and straw bedding.

All pigs are vulnerable, but for breeding animals and youngstock, mycotoxins can damage the placenta and cause abortion and stillbirth.

Adding binders to feed is the best form of defence because these absorb harmful mycotoxins.

Feed bins should be routinely emptied and washed and dried before they are refilled.

Straw should not be used in bedding for breeding pigs and youngstock if it has been baled in damp conditions.

Fertility can be problematic when service is not supervised.

Wean and mate sows on specific days. “The whole thing needs to be planned, week by week,” advises Mr Stevenson.

“Sows that are within sight, sound and smell – and possibly touch – of a boar are likely to be ready to serve between four and six days after they have weaned their litter.”

The service area should be light to activate the sow’s hormones.

“Attention paid at this time gives the best opportunity for as many embryos as possible to implant. Focus on simple measures like keeping the sow cool and exposed to minimum stressors,” says Mr Stevenson.

He recommends daily recording of all supervised services, with a service graded as good or poor.

“Regular analysis will chart the reproductive success against the target of perhaps 87% farrowing following a service some 116 days previously.”

Females should be at body condition score 3-3.5 at mating to ensure maximum ovulation and good conception.

For traditional pedigree British breeds, it can be difficult to ensure sows are not too fat at condition score 4.5 even 5, while hybrids often need to gain condition for mating. Attention to nutrition in the run-up to mating is therefore important.

“Feeding must be spot on before mating because if the metabolism progresses to a state of negative energy from underfeeding or unbalanced nutrition, the sow may fail to implant adequate numbers or viable young embryos,” says Mr Stevenson.

5. Too young at first service

Pigs mated before they are five-and-a-half to six months old are unlikely to achieve maximum ovulation.

“Gilts that are mated too young often fail to ever catch up – their performance will be poor in subsequent litters,” says Mr Stevenson.

High temperatures have a profound effect on fertility by lowering the desire in boars to mate. It can be a real issue for outdoor-breeding herds where temperatures cannot be controlled.

Mr Stevenson says pigs should have access to an ad-lib supply of drinking water. Wallows should be maintained and adequate shade and hut ventilation provided.

For large units, keeping a higher number of gilts or sows than needed can help maintain the required level of farrowings, advises Mr Stevenson.

“This is likely to be an action of increasing importance each season as extremes in weather become the norm.”